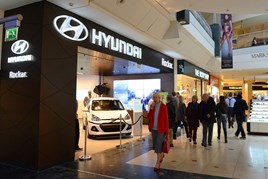 Rockar is to hand ownership of its digital stores back to the Hyundai Motor Company to be operated by the Motorline dealer group.

The Kent based dealer will take over full operation of the Hyundai stores in Bluewater and Westfield Stratford from March 1.

This is the first dealer group to be involved in Rockar’s digital sales strategy. Motorline will continue to use Rockar’s platform and Rockar will be providing consultancy.

Rockar was formed in December 2011 by Simon Dixon (former chief executive of Dixon Motors and co-founder of jamjar.com) to research and develop a customer focused car-buying proposition. Customers can buy either online or in-store.

Tony Whitehorn, Hyundai chief executive, said: “The Rockar concept was about going to the customers instead of asking them to come to us.

“One of the great things we’ve realised with the whole digital experience and the stores themselves is the customer satisfaction element.

“Right from the outset, Simon and I said ‘we’re doing this for the customer, because that’s what the customer wants’, and we’re constantly seeing satisfaction scores of 4.9 out of 5.”

He said Rockar has been instrumental in helping the Korean manufacturer to reach new and younger customers: 94% of Rockar Hyundai buyers have been new to the brand and the average age is 39 years old, with 54% of the customers being female.

“For Hyundai, part of our issue was awareness.

“When we worked with Rockar to develop the shopping centre concept, the key to it was transparency of price and positioning the product in a way where lots more people would see it. The clicks and bricks Rockar concept was geared up to engaging with customers who probably hadn’t even considered the Hyundai brand before.”

In December 2015, Rockar opened its second Hyundai store in the Westfield Shopping centre in Stratford. Both stores have a combined annual passing footfall of 89 million and have welcomed just under a million customers through their doors.

With the Bluewater store, Hyundai’s market share has risen from 1.7% to over 12% in the area - in a declining UK market – a result put down to the store’s presence.

Rockar will continue to maintain its Jaguar Land Rover business.

Rockar recently announced its partnership with Mitsubishi Motors in the UK - facilitating the setup of its digital stores and platform - and announced a new collaboration with retail chain Next that will see the opening of digital, Rockar-style stores within Next shops; the first of which will launch this spring.