JCT600 recruits three participants from its Get Into Automotive charity scheme 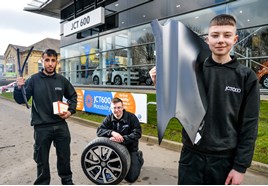 Three young people have been recruited by JCT600 having completed its four-week Get Into Automotive placement scheme, in partnership with the Prince’s Trust.

The Prince’s Trust helps 13 to 30 years olds who are unemployed or struggling at school to transform their lives. In 2016 the dealer group made a four-year commitment to help by providing work and training opportunities for these young people across its network of 50 dealerships.

JCT600 devised its own four-week Get Into Automotive programme, offering work placements and, potentially, ongoing employment to 12 young people in Bradford and Leeds.

The selected young people were allocated to the BMW/Mini Bradford, Mazda Leeds, Vauxhall Bradford and Volkswagen Bradford dealerships to get a first-hand taste of working for JCT600.

Ten of the participants succeeded in completing the four-week placement and three of these have now been recruited into JCT600’s service teams.  Asim Hussain, 21, of Keighley takes on the role of technician at the company’s Vauxhall Bradford dealership, while two of the other young people have been given fixed term contracts with the intention that they will then join JCT600’s apprenticeship scheme later in the year.  The trainee apprentices are Conor Asquith-Smith, 19 from Bradford, who will join Volkswagen Bradford and Patrick Wall, 16, who will be based at Porsche Centre Leeds.

Katie Saunders, HR director for JCT600, said: “When we became patrons of The Prince’s Trust, one of our key aims was to make a positive difference to the lives and opportunities of young people in our communities.  We’re proud to say that our ‘Get Into Automotive’ initiative has succeeded in doing just that.

“Almost 30 young people came along to our selection day and we were really impressed by their enthusiasm and potential.  Our celebration of the ten candidates who completed the programme was truly moving – they talked about their time with us, giving heartfelt thanks and many saying that it had been a life-changing experience for them.  To subsequently have been able to offer three of these young people jobs is the icing on the cake, both for them and for us.”

JCT600 has recruited more than 135 apprentices over the last four years and is planning to host other work placement scheme later in the year.