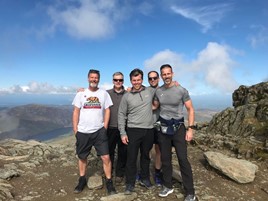 The daring team of directors from the Kings Lynn-based car retail group swapped the flat lands of East Anglia for the highest peaks in Scotland, England and Wales to generate funds for the charity and succeeded in raising over £4,000.

A total distance of 26 miles was covered as they climbed a total ascent of 3,000 metres as part of the challenge, which took place on May 11.

All proceeds from the event are being donated to EACH, a local charity supporting families and caring for children and young people with life-threatening conditions across Suffolk, Norfolk, Essex and Cambridgeshire.

Marriott Motor Group's aim for 2018 is to raise £11,200 for EACH as part of the Pay for a Day scheme which would fund the hospice services at The Treehouse in Ipswich and Quidenham for a day, providing 24 hours of care for families in these areas.

Victoria Matthews, EACH Suffolk Corporate Fundraiser, said: “We need to bring in some £5 million a year from fundraising to keep our vital service running.

“We simply couldn’t do it without the support of the business communities across Norfolk and Suffolk.

“This gesture from Marriott is a fantastic example in how to help us and we really couldn’t be more grateful.”

In addition to its Three Peaks challenge, Marriott Motor Group is fundraising for EACH through various activities such as monthly dress down days, bake sales and taking part in organised events such as the Orwell Walk in June.