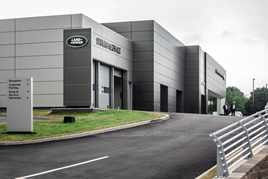 Roger Young has completed the £2 million refurbishment of its Land Rover dealership near Plymouth.

The development of the facility, in Saltash, was overseen by Jaguar Land Rover panel architect Meda International Ltd and took 35-weeks to complete.

Among the improvements offered by the refurbished facility, which follows JLR’s ‘Single Arch’ concept, is an enlarged showroom with display space for nine vehicles and two handover bays.

The Roger Young is based in Saltash, Cornwall, and operates Jaguar, Land Rover and Isuzu franchises from the town.

Managing director, Roger Young, began trading from his father’s farm in Bolventor, repairing Land Rovers and Farm Machinery and sold his first Land Rover as an official franchised retailer later that same year after becoming a Land Rover franchise for Defender only.

A move to larger premises in Saltash allowed the business scope for growth and it became one of the UK’s first franchisees to develop a JLR Arch concept dealership with the development of a new Jaguar facility in 2014.

In its last set of published annual financial results, to December 31, 2016, the group generated revenues of £60.3m and profit before tax of £1.85m.

AM Poll
Are video appointments a better use of sales executives' time than face to face appointments? Please leave a comment.
Vote
View all
2149