Former Shukers showroom to be transformed into a church 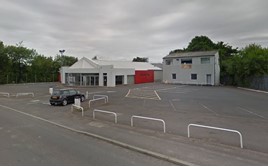 A former Shukers car showroom in Telford could be transformed into a church after the local council was asked to approve planning permission for its change of use.

Cars may be swapped for Holy Communion if the All Nations Church makes its move to the former Isuzu, SsangYong and Subaru facility on Holyhead Road, Ketley, after the car retail group made the move to a new, larger site.

Planning officials from Telford and Wrekin Council will consider the plans at a meeting next week, despite Ketley Parish Council's objections against the plans, which express concerns that a 150-strong expected congregation will overload the site’s 53 parking spaces, Wolverhampton’s Express and Star newspaper reported.

“Our base at Vanguard Way in Shrewsbury has outgrown its current facility and so for various reasons, including increased vehicle parking requirements and the expansion of our service and parts facilities, we need to re-locate to a much larger site,” Samantha Haydon, head of group business development, told the Shropshire Star at the time.

Shukers exited the Isuzu, Ssangyong and Subaru franchises in 2017, however, as part of a restructure of its operations and, following the March 2017 acquisition of Cambrian Garages, became a Hyundai and Land Rover franchisee.

The business, which achieved a turnover of £27.3m in the financial year to December 31, 2017 – alongside a profit before tax of £342,693 – now operates Land Rover franchises in Ludlow and Aberystwyth and a Hyundai franchise in Aberystwyth.