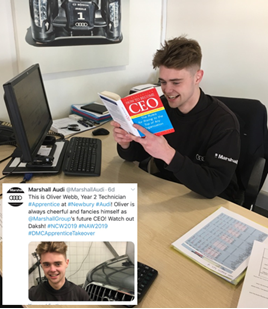 Drive My Career accelerated its campaign to raise awareness of careers for young people in the retail automotive industry as part of the National Apprentice Week (March 4 to 8).

Drive My Career is the employment platform launched by the National Franchised Dealers Association (NFDA) last year to make the retail sector more attractive to young jobseekers and connect potential candidates with their local retailers.

"It is encouraging to see that the Drive My Career Apprentice Takeover campaign helped us raise further awareness of why automotive is a great place to work”.

Only on Twitter, posts with the hashtag #DMCApprenticeTakeover had more than one million impressions and the campaign reached more than 200,000 different users in less than a week.

Organisations that took part in the initiative showcasing their best apprentices include Marshall Motor Group, JCT 600, TrustFord, Lookers as well as the NFDA.

Marshall Motor Group was the overall winner as they participated with the accounts of several different dealerships across the UK using multiple social media outlets.

Webb confessed that he "fancies himself as Marshall’s future CEO" and got a response from Marshall Motor Group chief executive, Daksh Gupta, who said he always likes a ‘little competition’ and added he will try to ‘keep the company in good shape until he takes over’.

Gupta also sent Webb a ‘How To Become A CEO’ book following his tweet.

JCT600’s vehicle technician apprentice, Jessica Suffield, won the best tweet as her description of the two years with the company alongside a great choice of imagery received the most engagement on Twitter.

The winning apprentices for the best campaign and the best tweet received respectively £100 and £50 voucher.