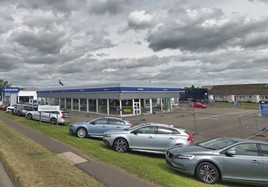 Cameron Motor Group is preparing to bring the full Volvo Retail Experience (VRE) to Perth with a £2 million redevelopment of its Strathmore dealership.

The Perth-based retail group, which also counts Volkswagen and Audi among its manufacturer partners, will start work on the Arran Road facility next months, according to local newspaper, The Courier.

The project has been on hold since original contractor McGill went into administration at the end of February, it reported, adding that Marshall Construction Ltd had now been recruited to continue the work, which is due to be completed in the autumn.

Work on Strathmore Volvo had started last summer and group director, Jamie Cameron, told the Courier that the facility had been “completely stripped out” when McGill went bust and the project ground to a temporary halt.

Cameron added: “McGill going under has added about six months on to the job as there’s been a four-month delay before we can get going again.”

Five years ago it rebuilt Volkswagen at a cost of £2m and last year it completed a £1.75m investment at Perth Audi.

The third-generation of the family firm now employs more than 160.

Cameron told The Courier that the group was “a good size at the moment”, but added that it was positioned to react quickly if the market changes.