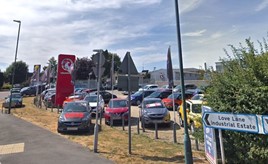 Baylis Group has secured the future of 30 employees at its Cirencester Vauxhall dealership after it was served notice on its site ahead of its redevelopment as a food destination.

Dave Jones, a director of Baylis (Gloucester) Ltd, told Punchline-Gloucester.com that the situation left the group “staring down the barrel of having to close a good business”.

"We have 25 to 30 people here in Cirencester and if we had not found another suitable premises they could potentially have lost their jobs,” he said.

Now, however, Baylis has managed to secure a long-term lease at the former Mitsubishi site on Gloucester Road, Stratton, and has now nearly completed a refurbishment bringing the site up to Vauxhall franchise standards.

Baylis will relocate its sales, service and parts operations to the new site and is hoping to redeploy its Cirencester-based accident repair team elsewhere in the group.

The £7.9 million turnover (2017) Baylis Group now employs 380 staff across eight sites, including Herefordshire and Worcestershire, and claims to be “one of the largest independently-managed Vauxhall groups in the UK”.

As well as its franchises with the Vauxhall brand, Baylis operates three Accident Repair Centres catering for all makes of vehicle, and runs an extensive trade and wholesale parts operation supplying customers across the Midlands, South West and parts of Wales.