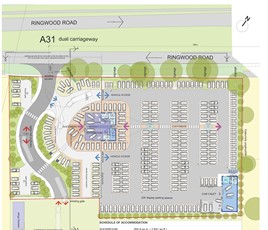 Hendy Group has begun a countdown to the opening of a new 200-car Hendy Car Store used car supermarket in Dorset.

Building work is almost complete at the site on Ringwood Road, at St Leonards, Ferndown, ahead of its scheduled opening in May.

The Car Store opening is part of the company’s overall expansion plans and will replicate a similar operation in Exeter where its Car Store has proved a huge success, according to Hendy chief executive Paul Hendy.

“We are delighted to confirm the new Car Store will open on Saturday May 25th,” said Hendy chief executive Paul Hendy.

“Simon has put together a great team to run the new Car Store and we’re now busy ensuring we have the quality of vehicles available that people have come to expect from our award-winning Car Store concept.”

Hendy’s Car Store plans come as part of a rapid expansion for the AM100 group, which is expected to rise in the annual rankings with a £1 billion turnover following last month’s acquisition of south coast-based Westover Group.

“Dorset is a key area for Hendy and following our acquisition of the Westover Group we are thrilled to be able to offer local buyers our Car Store concept which is based on offering the best choice of cars at the most competitive prices without compromising on the customer experience,” said Hendy.