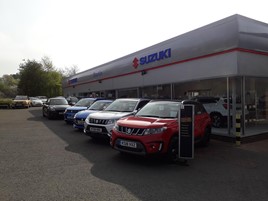 Startin Group has doubled its Suzuki representation with the opening of a new Redditch dealership just 10 months after it joined the Japanese brand’s franchised retail network.

A catchment area spanning Bromsgrove to Selly Oak will be served by the new facility, on Far Moor Lane, which will join the Worcester franchise it has operated since its May 2018 acquisition of Hylton Group’s St Peters Peugeot and Suzuki dealerships.

Dale Wyatt, director of Automobile at Suzuki GB PLC, said: “We are very pleased to be increasing our retail presence in the Midlands with the Startin Group.

“During the past year, our relationship with them has already proved a great success, and we look forward to continuing to build on this to deliver more positive results for the brand.

“We are proud to have the Startin Group within our network and they bring the essential qualities of experience and passion for Suzuki, which we are always looking for when appointing a new franchise.”

In February Henrys Cars has added to its franchised representation in Glasgow by joining the Suzuki GB dealer network following an £800,000 investment in a 12-car showroom in Titwood Road, to the south of the city centre.

In March Mangoletsi opened a Suzuki dealership near Knutsford, Cheshire, and Greg Mitchell Motors expanded the brand’s Northern Ireland representation with the opening of a new dealership in County Tyrone – bringing its total number of Northern Ireland dealerships to seven.

Daniel Shuker, dealer principal of Startin Suzuki Redditch, said that there was a “strong business case” for the group to open a second Suzuki site following the success of its Worcester franchise. He said: “We are delighted to be expanding our Suzuki portfolio with a second location.

“Since the launch of the Worcester showroom only a few months ago, we have had many car buyers making the journey from areas around Birmingham to specifically buy a Suzuki.

“Therefore, this presented a strong business case to add another showroom in Redditch and to take Suzuki to our customer base rather than vice versa.

“Plus, with the new Jimny and Vitara attracting significant interest, it’s set to be a busy few months ahead.”