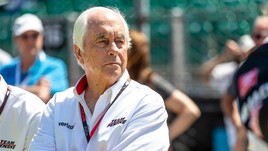 Sytner Group will be the only automotive retail partner of the 2021 Goodwood Festival of Speed, showcasing models from the Alpina brand.

Penske, who will be attending Goodwood as one of its VIP guests, will be celebrated as part of a special celebration called “The Maestros – Motorsports Great All-Rounders”.

He became one of the most successful figures in motorsport and the motoring industry, competed on the Goodwood Motor Circuit in 1963.

Goodwood will showcase Penske’s career by assembling some of the team’s most famous cars at the Festival.

Also confirmed is the Pontiac Catalina honouring the car that Penske himself drove to a NASCAR victory at Riverside in 1963, as well as the 2008 Daytona 500 winner.

Representing Team Penske’s foray into Formula 1 will be the Penske PC1 from 1975, the first car manufactured by Penske Cars UK, and the PC4, which won the 1976 Austrian Grand Prix driven by John Watson.

And, in fact, Penske himself will take to the Hill in the Porsche RS Spyder which won the 12 Hours of Sebring in 2008.

At the show, Sytner’s Alpina stand will showcase the latest range of vehicles plus, in the first glance paddock, festivalgoers will also have the chance to get a glimpse of the brand new Alpina B8 Gran Coupé, which Sytner Group is the sole UK distributor of.

Darren Edwards, CEO of Sytner Group, said: “We’re thrilled to be partnering with the Goodwood Festival of Speed. It’s one of the most highly anticipated events in sport and such a treat for anyone who loves beautiful cars and the thrill of seeing them in person.

“We know that there has been a huge buzz around the BMW Alpina B8 Gran Coupé so it’s wonderful to be helping to showcase the present and the future of cars as well as celebrating motorsport’s rich history.

"We also know that it means a lot to Roger, our Group Chairman, to be honoured as one of the 'maestros' of motorsport.”