MotoNovo Finance set for new premises and doubling of headcount 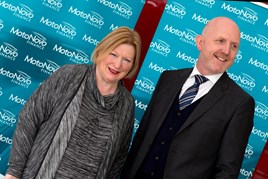 MotoNovo Finance is preparing to more than double its staff headcount as it relocates to all-new premises within the Central Cardiff Enterprise Zone.

Record sales and profit performance in 2015 have prompted the expansion - announced by Welsh Government Economy Minister Edwina Hart, alongside MotoNovo Finance CEO Mark Standish (both pictured) – which will create 580 new jobs in the business’ home city.

A statement issued by MotoNovo said that the move represented “the largest job creating inward investment project for the financial and professional services sector in Wales so far this financial year”.

MotoNovo Finance, which was founded in Cardiff in the mid 1970s, has enjoyed substantial growth in sales and reputation, both as a business and an employer, over recent years.

Sales grew by over 43% in 2015, it said, a figure which is significantly ahead of its core automotive finance market.

Recognised as 6th in the UK’s Top 100 Best Companies to Work For report published in February and one of only 1% of organisations holding the Investors in People Gold Standard, MotoNovo Finance has gained UK-wide recognition as an employer and now aims to invest in innovations to make finance more accessible.

Mark Standish CEO at MotoNovo Finance said: “Our roots are strongly in Cardiff, having been launched here as Carlyle Finance in the 1970s.

“Over recent years, we have demonstrated sustained growth, both in volumes and in reputation, not least of all as a high calibre employer having been recognised as one of the UK’s Best Companies to Work For.

“Today, our business is a highly respected and influential player in the automotive finance market and we are set to expand in this and other financial sectors in the months and years ahead.

“Our greatest strength is the people who make up ‘Team MotoNovo’ and having led the business for 16 years, I couldn’t be prouder than to be announcing our growth and investment plans, recognising the extensive help and support we have received from the Welsh Government in developing our plans.”

MotoNovo is part of FirstRand Bank Ltd, incorporated in South Africa, operating under its WesBank division, which itself is known as the Wheel Bank in Africa for its automotive expertise.