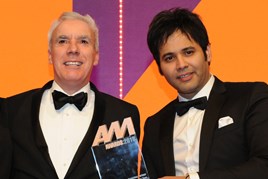 The AM Awards judges affirmed the reader vote by naming Suzuki as Franchise Partner of the Year, recognising its positive reputation among franchisees.

Finding favour for a lack of expensive corporate identity (CI) demands and its reputation of giving dealers the opportunity to get on with the business of selling cars and making reasonable profit, Suzuki is widely seen as a positive partner.

The NFDA’s Summer 2017 Dealer Attitude Survey communicated as much when retailers scored it 8.2 (average: 6.3) overall, placing it just behind Kia, Mercedes-Benz and Lexus.

In terms of the cost required to meet franchise standards, respondents scored  of a Suzuki an 8.4 (average: 5.5), just behind standard-setters Mercedes-Benz and Kia.

Suzuki delivered mild hybrid technology in 2017, an innovative starter-generator providing an electric boost to its new Swift and Ignis models.

While the Vitara continues to be the brand’s best seller (2017: 11,933), the return of the Jimny will offer retailers another compact off-roader to bolster consumer interest in the brand during 2018.

It will continue to pursue high-visibility marketing of new models through social media and via television adverts with Ant and Dec.

Suzuki has punched above its advertising weight in recent years, with award-winning television presenters and a series of viral YouTube videos.

Retailers have shown their appreciation of Suzuki’s approach with a flurry of investment at the start of 2018 – Hendy Group opened a new Suzuki operation in Crawley in January, while Desira Group opened a second outlet with the brand in Norwich as open points were filled.