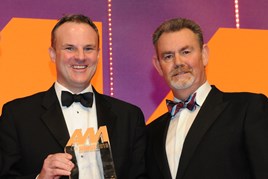 Kia’s standard-setting seven-year warranty and the ever-growing appeal of SUVs continue to cement the Sportage as a star performer for used car retailers.

Completing a hat-trick of Used Car of the Year Awards in 2018, following on from AM Awards successes in 2017 and 2016, when it wrested the title from the popular Ford Fiesta, the Sportage is a stand-out contender in the used car marketplace.

The result at the AM Awards mirrors the SUV’s reign at the top of Auto Trader’s fastest-selling car rankings.

In 2017, data compiled by the classified automotive advertising specialist found that the petrol-powered 2015-year Sportage, fitted with a manual gearbox, had hit the sweet spot with used car buyers.

Just as on the used car forecourt, the AM Awards judges continued to acknowledge the rakish design and ample standard specification of the South Korean SUV as key reasons for its success as a pre-owned vehicle.

Not only do buyers of a 2015 Sportage still benefit from four years of manufacturer warranty, but features such as sat-nav, leather seats and a panoramic glass sunroof continue to attract buyers.

Despite buyers’ preference for petrol-powered Sportages in 2017, the manual version posts a 40.1mpg fuel economy figure and 149g/km CO2 emissions to ensure it is still affordable as a family run-around.

Ominously for other manufacturers eyeing the Used Car of the Year title, early but low-mileage versions of the current generation of Sportage were already creeping into the sub-£15,000 bracket as AM went to press.