AM Awards 2018 – Business Leader of the Year – Darren Edwards 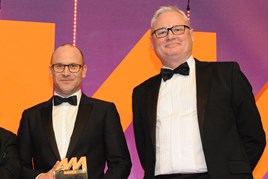 He is an energetic, understated leader, who has come up through the ranks and is responsible for steering the UK’s largest car dealer group past £5 billion worth of annual sales and for motivating a workforce numbering more than 8,000 people.

Darren Edwards (pictured left) is a true professional, as one would expect of anyone on the board of a group as highly respected as Sytner. A walk alongside him through one of its many businesses reveals a leader able to engage people at all levels. He is a warm and welcoming communicator and a driven

businessman, whose firm and fair manner makes others clear about what the company expects of them and what it provides in return. He takes a keen interest in all aspects of the business, from the systems in development by Sytner’s IT team to induction programmes from its HR and training department.

His career progression will inspire people joining any dealer group. From starting as a teenage apprentice bodyshop technician, he has held most of the roles available in franchised dealerships, from technician, to sales executive, business manager, sales manager and dealer principal.

After joining Sytner in 2004 as a BMW dealer principal, he was promoted to franchise director, then Volkswagen Group divisional managing director before succeeding Gerard Nieuwenhuys in 2014 at the head of Sytner Group.

Edwards and his team played a master stroke at the beginning of 2017 when they acquired CarShop, the UK’s largest car supermarket group and a former AM Award winner. Crucially, Sytner retained its management team and empowered them to build the business further, leading to the takeover of The Car People in December.

Edwards recognises he is now the focal point in a huge team of people that together make Sytner a success. Although business leader, he is responsible to them, and to global chairman Roger Penske, for ensuring the success continues.