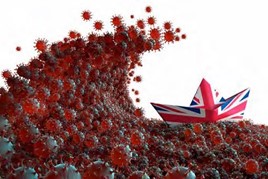 Increasing numbers of people are deleting the NHS COVID-19 app from their smartphones amid fears that ‘freedom day’ on July 19 could trigger a wave of enforced self-isolation and staff absences.

With the UK’s COVID-19 cases having risen 26.6% in the past seven days, to 236,076, warnings of a spike in the number of people with the app being forced to take up to ten days off work are growing in urgency as the nation prepares to ditch masks and social distancing from July 19.

The UK Government has said individuals with two vaccinations will no longer have to isolate from August 16, but that leaves a month of uncertainty for employers.

A survey published by Savanta ComRes has revealed that a third of people aged 18 to 34 have already deleted the NHS Covid-19 contact tracing app and a further 20% of all adults plan to delete it from their phones on July 19.

The poll, reported by the i newspaper, underlines concerns that rapidly rising coronavirus cases are causing hundreds of thousands of people to be “pinged” even after the briefest contact with an infected person.

Government Ministers have said the app would be tweaked to make it less sensitive after a 60% rise in alerts last week, it said.

He said: “There are so many people in Newcastle self-isolating it appears to me, we might as well be in a lockdown. At least I had booked a vacation in advance for early part of next week.”

AM reported last week that car retailers are keen to see Government deliver an “urgent solution” to the issue of staff absences due to COVID-19 self-isolation regulations.

The BBC reported that 4.5 million people could still be asked to self-isolate between now and August 19 and car dealers told AM that a solution to staff absences has become the most pressing ongoing business issue ahead of the July 19 lifting of COVID-19 restrictions in England.

This week Peter Vardy Group chief executive, Peter Vardy, told AM that his business currently has 70 of its 1,000-strong employees off work as self-isolation compounds its post-COVID staffing issues.

He said: “It is a real worry for us. Having so many staff out of the business just makes it harder to deliver the service that we want to. It’s putting a real strain on operations in some places.”

Speaking to AM about the lifting of COVID-19 restrictions on July 19, Swansway director Peter Smyth described the issue of having healthy staff off work due to an alert to social contacts as “a constant pain”.

“We need to cut out the absences from work. If that means more regular testing, so be it,” Smyth told AM.