Car dealers sounded a note of caution after Prime Minister Boris Johnson gave individuals the option of ditching their masks in a July 19 easing of COVID-19 restrictions in the UK.

While Marshall chief executive Daksh Gupta told AM that he would be waiting for a potential review on July 12 to make an policy decisions for his AM100 PLC, Swansway Group director Peter Smyth suggested that the sweeping changes would not affect its trading, stating: “We’ve already adapted as a business, there’s no going back”.

Devonshire Motors dealer principal Nathan Tomlinson called for “responsibility” to be exercised in the return to ‘normality’ alomost 16 months after the first coronavirus lockdown.

But others sounded a far stronger note of caution over the wholesale removal of restrictions, one stating: “This is a risk we don’t need to take.”

Gupta said: “I think we have to wait and see until the full guidelines come out. As ever with these things, the devil is in the detail.

“We have 85 people working in our business that are classed as clinically extremely vulnerable and, while some staff will undoubtedly be keen to take off their masks and return to normality, it will leave others – colleagues and customers – feeling extremely vulnerable. We have to bear that in mind.”

He also said that large sporting events and leisure facilities would be free to operate as normal, once again, without the need for social distancing.

A further Government review of the COVID-19 situation is expected on July 12, however, after the number of cases rose to 27,000 yesterday and data which suggests the Delta variant is responsible for a doubling of case numbers every nine days.

One poll suggested that 71% of people felt that it was too early to remove the need for masks in public places, while a Sky News poll suggested 51% held that view.

When asked by AM, Gupta said that it was possible large retail businesses may opt to impose their own rules, dictating that customers still wear masks in-store, despite changes to Government policy. 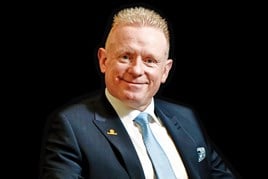 Smyth told AM that he felt most customers – and car retail businesses – had now shifted so effectively to omnichannel retail that Government’s offer of new freedoms would have a limited impact on business.

“I think we’ve already adapted as a business and there’s no going back,” he said. “There’ll be no surge in trade as a result of these changes.

“Essentially the changes will men that we can serve coffee and tea to customers in the showroom, it will enhance their experience in the dealership, but it won’t change much else.

“As a business we’ve delivered record results during the pandemic and made a lot of positive changes. Looking back over the 16 months it’s hard to concentrate on the cost of COVID as much as the positive investments we’ve made.”

Tomlinson said that the Prime Minister’s announcement yesterday was “the news we’ve been waiting for”, before highlighting “the responsibility we all have to take now for the health and wellbeing of ourselves, those around us, and our economy”.

He added: “The timing couldn’t have been better for us. We’ve certainly not enjoyed the restrictions, albeit we’ve learnt a lot in terms of operating a flexible business and a nimble structure, but by far the biggest challenge has been refranchising and trying to plan a facility upgrade without being able to rely on many of the traditional processes and channels of communication.

“Let’s hope that July is a sensible beginning, a time we’ll look back on as the moment we took back control and responsibility, because I think we’ve reached a point now where strong leadership is probably what’s needed more than anything else.”

Government will soon come under pressure to announce changes to the rules related to self-isolation.

Staff absences resulting from contact with those who have suffered from COVID-19 have placed pressure on businesses and many are keen to see testing replace the mandatory need to self-isolate.

Tomlinson said that he was keen to see unnecessary absences “as a result of either a false notification, confusion in process, or for emergency childcare as a result of a school reaction” minimised, if possible.

'Over by Easter': 12 months on from car retail’s COVID closures

'Over by Easter': 12 months on from car retail’s COVID closures