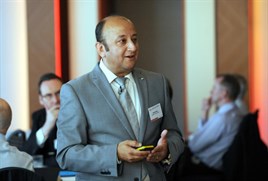 Its chief executive says the move will accelerate the growth path the company has been on in the last six years, enabling more sizeable acquisitions and expansion of its existing operations.

The flotation on the alternative investment market (AIM) by the private, family owned business saw the placing of 26.9m shares at 149 pence per ordinary share – or 38.4% of the total. The Marshall family now owns about 66% of the business. In addition to the £40m Marshall also has access to £75m in a revolving credit facility (RCF).

Chief executive Daksh Gupta (pictured) told AM: “The float enables the company to have access to capital to fund the continued growth aspirations. It gives us the potential to buy bigger, but the approach to acquisitions on a case by case business with existing brand partners remains the same.

“It also allows the company to invest in freehold opportunities, site upgrades and redevelopments, as well as the website and e-commerce platforms.”

Marshall is the only group, he said, to hold the franchises for the top 10 volume and top five prestige brands. But it is the company said, “under-represented with certain of its core brand partners” and sees this as an opportunity to increase national representation.

“But we have no aspirations to be the biggest dealer in the UK – the next Pendragon,” Gupta said.

“We want to continue to do a good job for our OEM partners, that have been extremely supportive in the 18 months the float has taken to plan, and continue to focus on delivering the best we can to our employees and our customers.”

He said the move will not lead to a change in management style: “This company has been run for many years in the same way as a plc. Plcs are operated extremely professionally, and there are a number of private groups - JCT600, Listers and Ridgeway for example – that are run as good as any plc. I don’t buy the theory that plcs are run better – or intrinsically differently – to a private group.”

The company also now has a new board.

The directors have an approximate 1.3% share-holding.

The float is a culmination of a strategic review instigated by Gupta to balance its brand portfolio expand beyond its East Anglian heartland where a concentration of dealerships had led it to compete with itself.

The plan was to add “depth and scale” to its representation. By the end of 2014, Marshall Motors had exited 21 non-core or loss-making franchises, while making 12 acquisitions and building six start-ups, and taking on Audi, Mercedes-Benz, Volkswagen, BMW and Mini franchises.

Six years ago Marshall was represented in six counties, it is now in 16.

“The six years I’ve been with the company have seen dramatic and exciting change in the business, the next six should be as exciting. The flotation should mean we retain and attract the best people as Marshall is clearly a company going places.”

Gupta hopes eventually to introduce a share scheme for staff.

Parent company Marshall of Cambridge (Holdings) said the proposed float is part of a "clear commitment" to support the continued growth and expansion of all its principal operating companies, including Marshall Motor Holdings, Marshall Aerospace and Defence Group, Marshall Group Properties and Marshall Fleet Solutions.