Lexus to celebrate 10 years of F performance at Goodwood 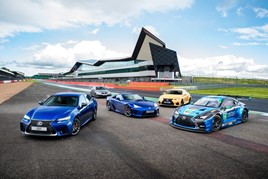 Lexus will mark the 10th anniversary of its ‘F’ performance brand at Goodwood Festival of Speed with driver Scott Pruett.

Five-time Daytona winner and former Lexus LFA development driver Scott Pruett will be taking to the hill in the Lexus RC F GT3 racing car, Pruett will be at the wheel of the blue chrome liveried American 3GT Racing car.

Abbie Eaton, test driver on television’s The Grand Tour, will also be driving up the hill at the wheel of the iconic Lexus LFA.

The new RC F 10th Anniversary will make its dynamic debut in the First Glance paddock.

Later in the month, that special eition RC F coupe will also be on static display at the Silverstone Classic, and both CarFest North and CarFest South. It will be joined at the former by the RC F GT3 and the race-prepared RC F Cup cars.