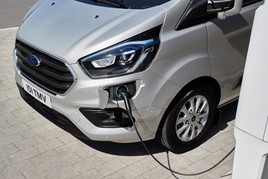 Ford has officially unveiled the production version of its Transit Custom plug-in hybrid electric vehicle, which goes on sale next year.

It was unveiled at the IAA Commercial Vehicle show in Hannover, Germany, where Ford also announced revisions to the Transit Custom line-up, including an upgraded 2.0-litre EcoBlue diesel with a more powerful 185PS variant, a segment-first diesel mild hybrid powertrain option, and new connectivity and driver assistance features.

The Transit Custom PHEV features a hybrid powertrain system that targets a zero-emission driving range of 30 miles, and uses the 1.0-litre EcoBoost petrol engine as a range extender for total range exceeding 300 miles.

The vehicle uses a series-hybrid driveline configuration, the front wheels being driven exclusively by an electric motor, rather than by the combustion engine.

Power for the motor is provided by a compact 14 kWh liquid-cooled lithium-ion battery pack located under the load floor, which has been carefully positioned to preserve the full cargo volume offered by the standard Transit Custom van, and a payload exceeding 1,000kg.

The 1.0-litre EcoBoost engine generates additional charge for the batteries when required.

Using the charge port located within the front bumper, the Transit Custom PHEV can be charged using a domestic 240 volt 10 amp power supply, achieving full charge in five hours, or a commercial 240 volt 16 amp or 32 amp supply, which can bring the pack to full charge in three hours.

Ford Transit Custom PHEV prototypes are undergoing a 12-month real-world trial with fleet customers in London, covering in excess of 30,000 miles to date.

The vans – equipped with telematics systems – gather data on operational and environmental performance, including charging patterns, journey patterns and real electric-only range, while in use by commercial fleets including delivery and construction companies, utilities and services such as the police.

The data collected is helping Ford to better understand how to optimise the hybrid powertrain and explore how lower-emission plug-in hybrid electric vans could support cleaner air targets, while boosting productivity for operators in urban conditions.

The PHEV model will enter volume production in the second half of 2019.