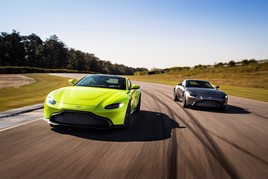 The value of Aston Martin shares faltered after the British sports car maker made its debut on the London Stock Exchange this morning.

Having opened at £19, values soon dipped as low as £17.75 after market analysts held-up the offer as an indication of investors’ faith in UK business, The Guardian newspaper reported.

The 105-year-old firm’s market value of just above £4 billion is some way below its anticipated price tag of over £5 billion in the sale which saw the brand offer 25% of its stock.

The Financial Times reported that the valuation would see the brand miss out on a place in the FTSE 100 at the next reshuffle of the index in December.

However, at this stage the offer is open only to institutional investors, company staff, customers and members of the Aston Martin Owners Club resident in the UK, with private investors eligible to buy shares from October 8.

Aston Martin chief executive, Andy Palmer, had described today’s listing was “a historic milestone” for the Gaydon-based brand famed for its links to the James Bond movie franchise.

Palmer said: “We are delighted by the positive response we have received from investors across the world and are very pleased to welcome our new shareholders to the register.”

The Guardian reported that Palmer’s annual salary of £1.2m meant that he was entitled to a maximum yearly bonus of £2.4m and share awards worth up to £3.6m under a performance share plan. At £17.75 a share, his 0.6% stake in the company is worth £24m.

Its future growth is very closely tied to the success of its forthcoming SUV, so far named the DBX but understood to be called Varekai when it reaches showrooms next year.

The new model will be built at the brand’s ambitious St Athen manufacturing facility, in Wales, which is currently under construction.

In an interview with Autocar magazine, he said: “When you are talking about running a company like Aston, you talk through your ideas with the owners before you are hired.

“My message was simple: if Aston wants to survive, it must do an SUV.”