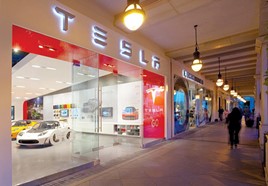 Tesla has halved the number of stores it plans to close as part of a cost-cutting drive which would help it fulfil a $35,000 (£26,975) price promise for its Model 3 EV saloon car.

The California-based electric vehicle manufacturer had said last month that it planned to take its sales entirely online as part of a drive to cut costs by an estimated 5% and maintain the pricing of its first mainstream car.

It has now indicated that price rises of around 3% for its more expensive Model S and Model X models will allow it to halve its planned number of store closures.

Tesla said "We have decided to keep significantly more stores open than previously announced as we continue to evaluate them over the course of several months," the BBC reported.

Tesla said that store customers will be shown how to buy a vehicle on their phone, a process which Tesla says will take just a few minutes, adding that a "generous return policy" would help to avoid the need for test drives by allowing buyers to return a car after 1,000 miles or seven days.

According to Forbes, Wall Street reported an 8% drop in the Tesla share price after the announcements that they were moving to online only last week.

A total of 378 Tesla stores across the globe – 23 of them in the UK and Ireland – had been put under threat from Tesla’s strategic shift towards online sales.

AM reported that Marketing Week columnist, Mark Ritson, wrote in an opinion piece on the move that Musk had indicated that he understood the potential long-term impact of the measure, the Tesla chief executive having stated: “I wish there was some other way.”

Ritson, who claims he was persuaded out of the potential purchase of a Tesla Roadster by his local Porsche retailer, who successfully encouraged him to instead place a deposit for the forthcoming Taycan EV, said that a physical sales network and the ability for customers to test drive a vehicle remained a vital part of the automotive retail model.

He said: “A test drive is a crucial moment of truth – especially when it’s your first electric vehicle, let alone your first Tesla.”