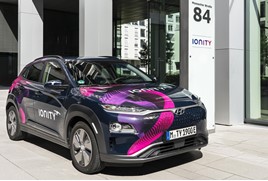 The joint venture between BMW Group, Ford Motor Company, Daimler AG, and the Volkswagen Group with Porsche AG, welcomed the two OEMs on board as it drives towards a goal of making long distance EV travel across Europe a reality.

Inonity initially revealed its plans fo rthe UK in April and last month the business, which was founded in November 2017, opened its second high power charging station in the UK – in Milton Keynes – following the earlier opening of its first site on the M20 near Maidstone.

Its UK charge network allows EV owners to recharge their vehicles in as little as eight minutes via 350kW charge points (where vehicles permit) fed by renewable energy.

“The participation of new investors in Ionity is a clear signal of trust indicating that the work of our young company is already bearing fruit.”

“I am confident that our work with Ionity will open a new era of high-power charging experiences, where charging will be seamless and easier than refuelling for our customers.”

As of today, Ionity has already achieved a network of nearly 140 stations live in 14 European countries with a further 50 under construction.