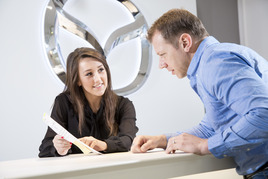 Mazda has introduced a Gender Balance Initiative to increase the representation of women in front-line and senior management roles across its UK dealer network.

The brand has an aim of achieving a minimum of 30% representation of diverse women in key leadership roles by 2030.

To support the initiative, Mazda has co-funded the membership fees for eight new multi-franchise dealership group members – which represent an additional 32 Mazda dealerships and 25% of the Mazda dealership network.

It brings the total number of Automotive 30% Club members with Mazda franchises to 47, or 40% of its UK dealer network.

Leading the new initiative, Laura Brailey, head of retail operations at Mazda UK, said: “Mazda has been a member of the Automotive 30% Club for a number of years, and I’m proud that we have taken many steps to embed an inclusive and cohesive culture at Head Office. From our own research it’s clear our customers want change within the dealership environment, and in order to influence a positive and meaningful change, we wanted to tackle this at the very highest level.”

Auto Trader Research, from 2018, discovered that a third of women who visited dealerships noticed very few, if any, women in car sales showrooms and 13% found the lack of diversity created an uncomfortable showroom experience. In total, 94% of women said they don’t trust car dealerships.

Speaking of the research, Jeremy Thomson, managing director of Mazda UK, said: “Clearly this has to change. Research by Mazda UK in 2022 into 1,900 car dealer customers and prospects indicates that the situation has not improved in the last four years.”

He said Mazda’s data shows that over a half of women and a third of men would like to see the gender balance improved. However, nearly all respondents said that gender tokenism and quotas are not acceptable and the staff should be appointed on capability.

Thomson added: “Our conclusion is that we must continue to make the dealership working environment more attractive and inclusive and that in itself will accelerate a natural balance.

“If Mazda can support and influence a positive change, it is reasonable to think this can extend across all brands the groups have which totals to a huge 578 dealer points across the UK.”

Mazda was the first member of the UK Automotive Club to successfully achieve the 30% mix with its senior leadership team.

The Institute of the Motor Industry (IMI) has called on automotive retail employers to engage with the task of creating a more diverse workforce after publishing the findings of its Diversity Task Force report.

It identified that 14% of the automotive retail workforce had a disability, with 16% of sales staff and 26% of those working in parts and accessories having some level of disability.

This compared to 15% in non-automotive industries. The Task’s Force’s insight into the ethnicity of the sector, meanwhile, found that 81% of the automotive retail sector’s employees identified as white-British, compared to 56% in other industries.

In gender terms, male employees also account for 81% of automotive retail employees, aligning to a further clear disparity in representation.