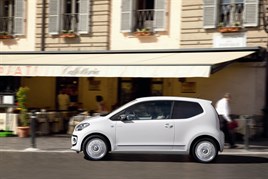 The Volkswagen Up has been named the lowest depreciating car. CAP says depreciation over the past three years averaged £4,410 – or less than half of the car’s original new price tag.

Runners-up in the latest chart are the Kia Picanto, which lost an average of £4,665 since April 2012, and the Perodua Myvi, which depreciated over the past three years by an average £4,873.

Philip Nothard, CAP’s retail and consumer expert, said: “Although our industry is fond of focusing on percentages when it comes to depreciation, we believe that what really matters to motorists is the actual money they lose when they own a car over time.

“Some cars do achieve fantastic percentage value retention and very low cash value reduction and the most impressive combination in our latest top 10 is the Audi A1, which has hung onto around 65% of its cost new while losing only £6,000 in cash.

“But anyone who bought a Volkswagen Up three years ago should be celebrating now because they have lost less money than people who bought any other type of new car.

“Our advice to motorists is always to put depreciation at the top of the list of their budgeting criteria, if they are keen to keep their spending down, because it is always more significant than any of the other costs associated with running a car.

“Our research among consumers has shown that people tend to mistakenly focus on the less significant motoring costs – like fuel economy – because they are easier to see.  In contrast, depreciation is invisible in day-to-day life and only reveals itself when you get a valuation or come to dispose of the vehicle.

"That's why we always encourage people to check the long term predicted ownership costs of cars by using a service like CAP's Total Cost of Motoring tool.

“But certainly, anyone who bought a Volkswagen Up three years ago won’t be getting any nasty surprises when they find out how much their car has depreciated, because it’s the best performer in the market over the past three years.”