February’s new car market was the highest for the month in 12 years, as registrations reached 83,395 units.

The Society of Motor Manufacturers and Traders data shows the private market drove the 8.4% total market increase, with a 22.6% rise in private registrations year-on-year, equating to 6,948 units.

So far this year there have been almost 12,500 extra new cars registered in the private market.

Demand was up across all fuel types, with diesel and petrol registrations growing by 5.6% and 10.7% respectively, while alternatively-fuelled vehicles enjoyed an uplift of 19.9%.

Mike Hawes, SMMT chief executive, said: “February is typically one of the quietest months of the year, ahead of March’s plate change, but this positive performance is encouraging and puts the sector in a good position for the coming 12 months.” 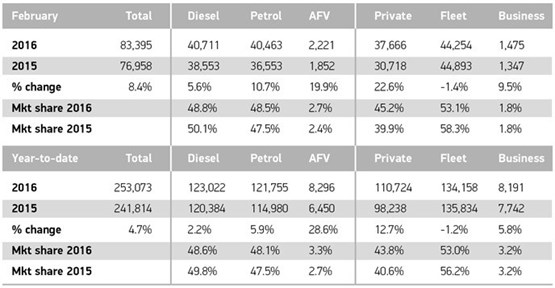 “Increased sales are supported by strong manufacturer deals and low cost finance offers that are encouraging consumers to buy.

“We anticipate the market to continue to grow, and have strong expectations ahead of next month’s 16-plate change where customers will be likely to take advantage of a range of substantial discounts and savings, in addition to a variety of low rate finance packages being made available.”

Commenting on the fall in fleet market registrations Steve Jackson, chief car editor at Glass’s, said: “Post-recession fleet has returned to pre-recession volumes and now is largely a numbers game.

"Manufacturers are competing for a share of a finite, yet important market of fixed term contract company car drivers via BIK advantages and financial incentives.”

Richard Jones, managing director of Black Horse, said: “These are encouraging figures for the UK automotive industry, continuing a strong start to the year.

"The increase can be attributed to a combination of further growth in PCP financing, ongoing low interest rates for consumers, and continued high levels of manufacturer subsidisation, driving up the volume of affordable new cars coming into the UK market.

"This time next month we should have a good indication of the outlook for the rest of 2016.

"Whatever happens, dealers will continue to remain crucial to the car buying journey.”