UK commercial vehicle registrations have grown by 2.2% for Q1 as overall growth for the EU market experienced a surge in demand of 12%.

Figures released today show that demand for new commercial vehicles in the EU rose 8% in March, totalling 242,049 – the region’s 15th consecutive month of growth in the sector.

In Spain, registrations saw a minor decline (-0.6%). It is also extremely encouraging that all segments of commercial vehicles recorded a positive upturn.

Commenting on the figures published by the European Automobile Manufacturers' Association Sue Robinson, director of the National Franchised Dealers Association which represents commercial vehicle and franchised car retailers across the UK, said: “We are pleased to see that commercial vehicle registrations in the EU grew by 8.0% in March marking 15 consecutive months of growth.

“This has been a very positive first quarter for the EU market that saw a general increase of 12.1%, totalling 563,132 commercial vehicles. Also, during the first three months of the year all major markets have grown.

“The segment of light commercial vehicles up to 3.5 tonnes rose 7.6% compared to the same month last year, marking 31 consecutive months of growth. In total, 204,157 units were registered. Registrations remained strong also for heavier trucks over 3.5 tonnes, growing 11.1% compared to March 2015 and totalling 34,092 new trucks registered in the EU.

“Considering the huge results recorded in 2015, it is encouraging to see that the market is continuing to perform well on the back of last year’s success.”

Below is ACEA’s graph charting the month-on-month rise in commercial vehicle registrations in the EU: 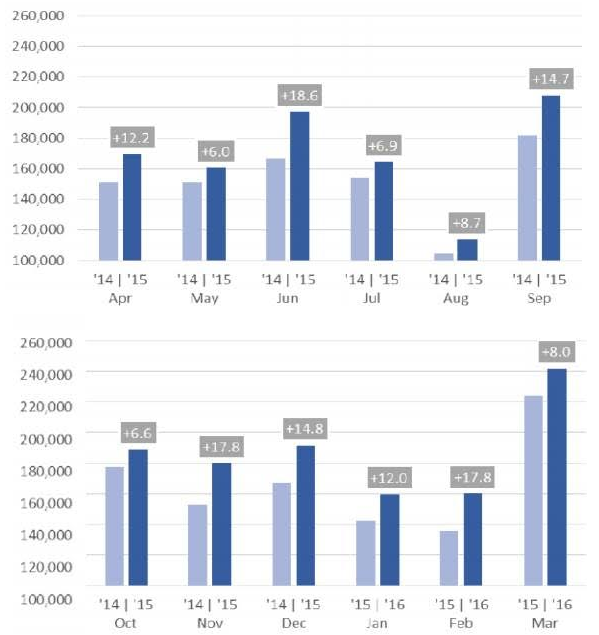