Year-to-date figures showed gains in 26 markets, with 16 of them posting double-digit growth.

The SUV segment saw the biggest growth, with its registrations counting for 25% of sales in March Q1 2016, an improvement on the 21.7% share this segment registered in March 2015 and during the first quarter of last year.

B-segment (sub-compact cars) and MPVs suffered most with the highest market share loss.

Volkswagen was the best-selling brand in March and across 2016 so far, leading the rankings in Austria, Belgium, Croatia, Denmark, Germany, Latvia, Netherlands, Norway, Slovenia and Switzerland during the first quarter.

The biggest market share winners during the first three months of the year were BMW, Renault and Fiat, with the last two benefiting from strong SUV demand growth.

“Overall, we have seen a trend of positive growth so far this year. Consumers are consistently responding well to the brands’ latest launches, despite the problems faced by Europe’s largest car maker,” said Felipe Munoz, global automotive analyst at JATO Dynamics.

Seven of the 10 biggest market share winners were SUVs, with the new Hyundai Tucson controlling almost 1% of the market, following strong demand in the UK, Germany, Italy and Ireland.

The Tucson was the third best-selling compact SUV, outselling other important players such as the Volkswagen Tiguan and Ford Kuga.

The Hyundai was followed by its rival from Renault – the Kadjar – with 0.84% market share, and France counting for 30% of its European volume.

The Suzuki Vitara, Fiat 500X, Mecedes GLC, Mazda CX-3 and BMW X1 were the other SUVs to gain more market share, along with the Opel/Vauxhall Karl/Viva and Astra, and the Skoda Superb.

“SUVs continue to post strong growth at the expense of the traditional segments. The first quarter results reveal a clear trend of European consumers shifting their interest from subcompact and compact cars, and from MPVs to small and compact SUVs”, said Munoz. 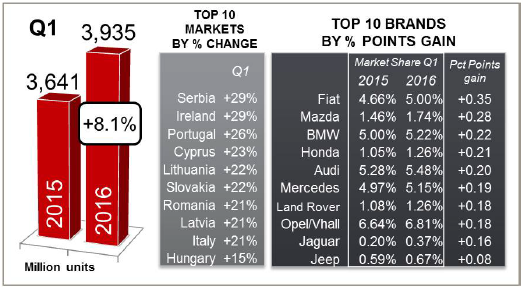 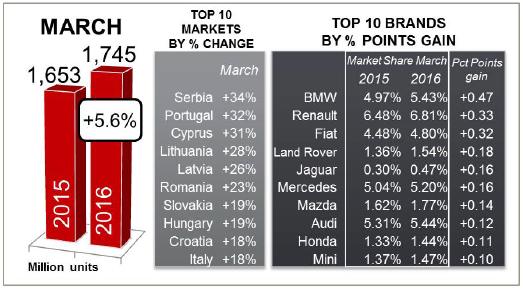 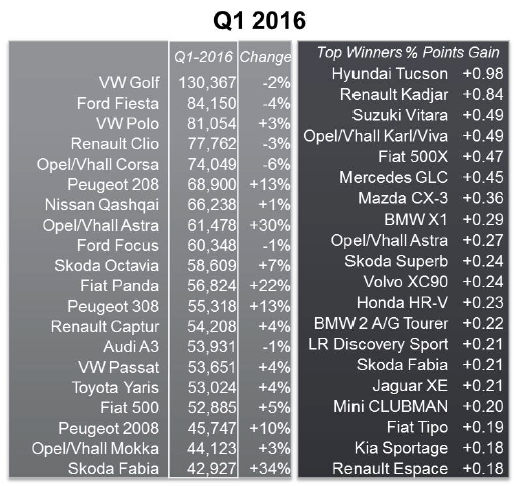 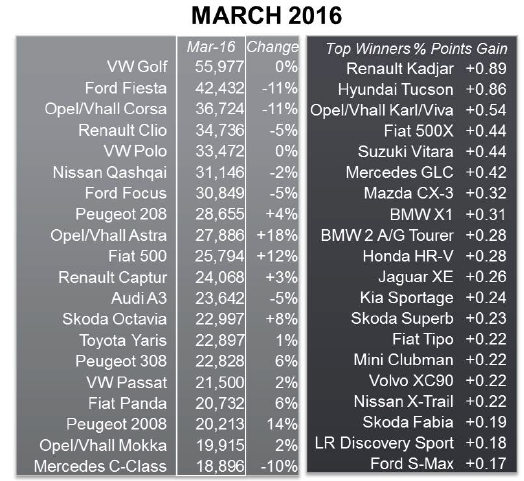