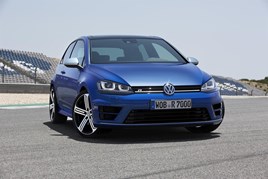 JATO Dynamics said that the decline demonstrates that Volkswagen’s emissions issue continues to affect the brand, with the car maker still being fined in some European markets.

“It is clear that Europe has started to feel the effect of Volkswagen’s emissions issue,” said Felipe Munoz, Global Automotive Analyst at JATO Dynamics.

The biggest market share growth among the top 10 brands during July was the 3.4% increase posted by Fiat, this comes despite a fall in sales from the Fiat 500.

Fiat’s sales were boosted by the new Fiat Tipo, and the continued growth of the B-SUV Fiat 500X.

While the Volkswagen Golf remained the region’s favourite model there was a good performance from the new Vauxhall Astra as the model continued to grab more market share in the compact segment, meaning that the Opel/Vauxhall brand was able to increase market share.

Other big winners include Dacia, who posted double-digit growth in four of the five markets, thanks mostly to the Sandero hatchback.

Kia’s new Sportage, and the good results of Land Rover’s updated Evoque also posted good results in an SUV market which swelled by 12.5% and now accounts for more than a quarter of overall sales.

Felipe Munoz, Global Automotive Analyst at JATO Dynamics, said: “Despite the slowdown in the market, the demand for SUVs is increasing, and is expected to keep growing, especially with new models being unveiled in the upcoming months.” 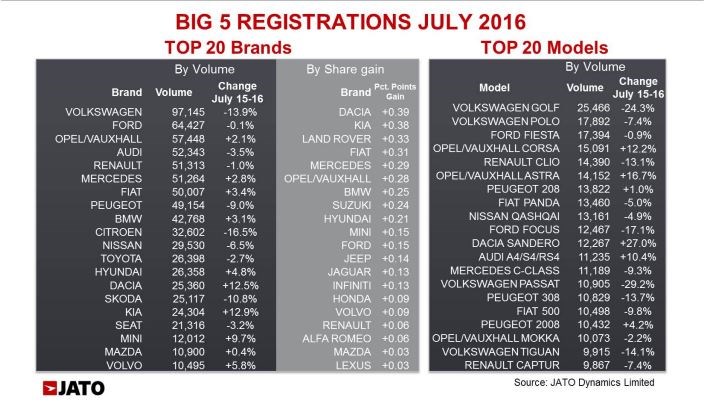 New car registrations in Europe’s ‘Big 5’ markets dropped by 2% in July, as market conditions halted the positive trend that had dominated over the previous 15 months.

While Spain, Italy and the UK all posted modest growth in July, this could not fully compensate for the declines seen in France and Germany.

This slowdown is partly due to July 2016 having two fewer working days compared to July 2015. As Europe’s largest carmaker, the double-digit fall in VW Group’s monthly sales also had an impact.

The biggest decline was posted by France, with total registrations for July falling 9.6% compared to the same month last year, to 132,893 units.

Demand appeared to be cooling in the UK, which saw an increase of just 0.1% - the result of exceptionally strong demand in 2015, and a continuing drop in private sales.