For the year to date, registrations surpassed the 10 million unit mark, an increase of 7.7%, when compared to the same period in 2015.

This increase can be attributed to the double-digit growth posted in 16 markets, including Italy and Spain which recorded increases of 20% and 14% respectively.

Germany posted a strong increase of 8%, while Belgium and Poland were up by more than 20% each.

Smaller markets including Romania, Hungary and Croatia performed even better with increases for the month of 69%, 44% and 39% respectively.

SUVs were the biggest contributor to the upturn seen in August, accounting for more than 25% of all registrations and achieving double-digit increases in 28 of the 29 markets analysed.

Overall, volumes for the SUV segment increased by 30%.

This can largely be attributed to the recently launched new models.

The biggest SUV segment volume growth was seen in Italy, which recorded a 53% increase on last year, followed by Ireland at 48%, Belgium at 43%, Portugal at 41% and Norway with 40%.

In comparison to the growth of SUVs, traditional segments continued to lose ground, with the city-car and large sedan segments both posting declines of 0.7% and 10.9% respectively.

Similarly, demand for the sports segment cooled with the segment posting a small growth of 2% following months of dramatic increases. 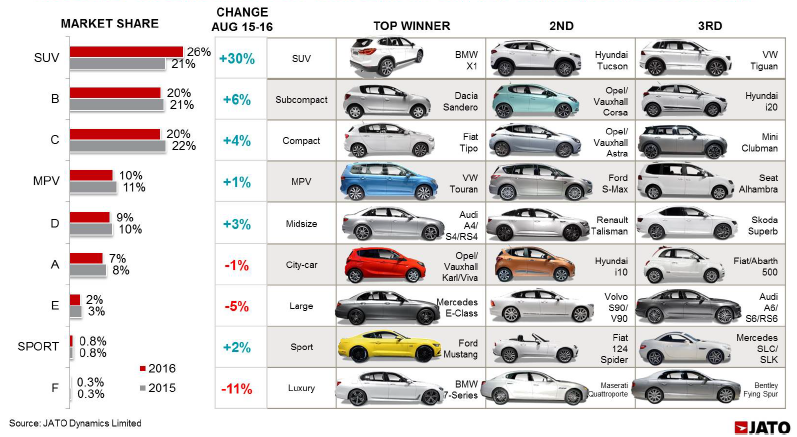 Volkswagen Group brands on the up

All brands within the Volkswagen Group posted volume increases, with only Volkswagen, Audi and Skoda, growing less than the market average.

Volkswagen Group retained its position as the best-selling manufacturer but its modest growth of 5.2% was not enough to prevent it losing market share.

Compact cars accounted for the largest share of Volkswagen Group’s registrations, despite the compact segment’s volume dropping by 5.4%.

Volkswagen Group has made progress in the SUV segment, with its SUV range recording an increase of 24.8%.

The Renault-Nissan alliance continued on its upward trajectory, with the group displaying a volume increase of 13.1% which is more than the total market average.

This was possible due to the outstanding performance of the Dacia brand, which posted a 44.3% increase compared to the same period last year.

The alliance also continue to lead the European SUV segment, with one in every four SUVs sold being from the Renault, Dacia, Nissan or Infiniti brands.

PSA lost 0.57 points of its market share and posted a small increase in registrations of 2.8%, placing it third in the ranking.

The French manufacturer is attempting to boost its registrations with the upcoming launches of the 3008 Compact and the 5008 midsize SUV.

Meanwhile, Hyundai-Kia Group posted a significant growth of 15.9%, largely due to its small car category and the outstanding performance of its SUVs, with the Hyundai Tuscon posting the highest market share increase of all models.

Daimler Group completed the top five group ranking, with a dramatic increase of 18.2%, the second highest amongst the top ten, just behind FCA with 19.9%.

The only car makers to see declines in registrations were Volvo, Mitsubishi and Subaru, posting drops of 14.8%, 9.8% and 6.8% respectively.

The Volkswagen Golf maintained its position as Europe’s best-selling model in August, with 29,500 units registered, which represented an 11.5% decline on the same period last year.

The model maintained its lead despite posting the highest market share drop of any model, moving from 4.3% in August 2015 to 3.5% in August 2016.

In contrast, its rival the Opel/Vauxhall Astra was the fourth best-selling model with 14,400 vehicles registered in August 2016, a 23.0% increase on the same period last year.

Second in the ranking was the Volkswagen Polo, despite a 10.6% decline; Polo registered just 14,751 units compared to 16,504 for the same period last year.

Nonetheless, the Polo was still ahead of the Ford Fiesta even with the model’s significant 11.3% increase in registrations.

Amongst the other subcompacts, the Peugeot 208 posted a dramatic 16.5% increase which saw it outperform its rivals the Opel/Vauxhall Corsa and Renault Clio.

In the SUV segment, the Volkswagen Tiguan stood out, registering 14,300 units which is a significant increase of 79.1% which made it the sixth best-selling model in Europe and the best-selling SUV.

The Renault Captur similarly performed well, posting a 19.5% increase which saw it outperform the Nissan Qashqai.

Felipe Munoz, global automotive analyst at JATO Dynamics, said: “Following the slightly disappointing results in July, August has seen a return to growth. With the Paris Motor Show at the beginning of October, we would expect new launches to further impact the market in Q4 2016.”