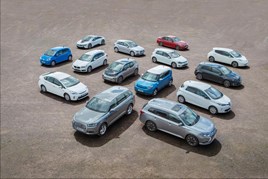 The Office for Low Emission Vehicles has announced £10m of funding to support the installation of charging infrastructure in businesses and in residential streets.

Part of the of a £35m investment in the ultra-low emission vehicle sector, the £7.5 million funding for workplace charge points, coupled with the £2.5 million for residential on-street infrastructure will aim to further accelerate electric car uptake by enhancing motorists’ confidence and expanding charging options.

In September 6,113 electric cars were registered, a 56.2% year-on-year increase.

Poppy Welch, head of Go Ultra Low, a campaign aiming to increase purchase consideration of electric vehicles, said: “The £10 million government investment in workplace and residential charge points is sure to boost motorists’ confidence in electric cars and vans while accelerating uptake rates.

“While more than 90% of electric car charging takes place at home, this announcement gives drivers extra options and addresses a perceived lack of accessible charge points.

“Looking at year-on-year growth, September was the 53rd consecutive month of registrations rises in the electric car market.

“There are more plug-in cars on our streets than ever before. As more drivers realise the cost-saving benefits of these vehicles and the variety of models continues to expand, we expect uptake to continue its strong upward trend.”

Transport Minister, John Hayes, said: “The number of ultra-low emission vehicles on our roads are at record levels and we are committing £35m to help install new charge points and offer new grants as we aim for nearly all cars and vans on our roads to be zero emission by 2050.”

Mitsubishi Outlander PHEV is this year’s most popular plug-in hybrid with 7,770 registrations.

The Sunderland-made Nissan Leaf is 2016’s best-performing pure-electric car with 3,728 registered over the January-September period.