Fleet sales accounted for more than half the market as new car registrations reached a record total of 2.51 million by the end of November, SMMT figures reveal.

The number of private buyers fell by 1.2% during the month, but fleet continued to make up the shortfall as the UK new car market rose by 2.9% in November, with 184,101 vehicles registered on UK roads.

Last month private registrations slumped by 2.6%, with fleet taking up some of the slack with a 2.2% rise.

SMMT chief executive was upbeat about November’s results, however, which saw alternative-fuelled vehicle sales rise by 25.1% to 6,663 units, representing 3.6% of the market – the highest ever achieved.

Hawes said: “Our industry continues to make vehicles that are ever safer, more refined, more efficient and more enjoyable to drive – and the latest advanced technology and cutting-edge designs are continuing to attract buyers into showrooms.

“It's encouraging to see that alternatively fuelled vehicles, although still a small proportion of the market, have seen strong growth this month achieving a record market share.

“Long-term government support and incentives are essential if these vehicles are to command a larger market share in the future.”

The manufacturers making the biggest year-on-year gains during November were:

The biggest fallers during November were:

Superminis continued to be the most popular body style – making up more than a quarter (29.7%) of all cars registered in November, followed by small family cars and SUVs.

Executive and city cars enjoyed the biggest growth, up 27.7% and 25% respectively. 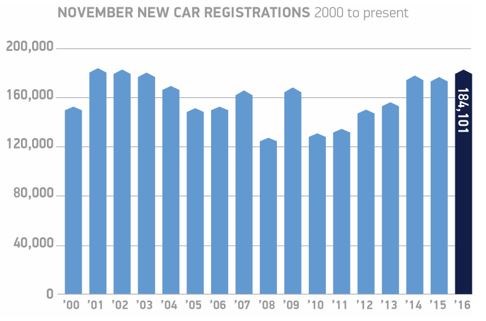 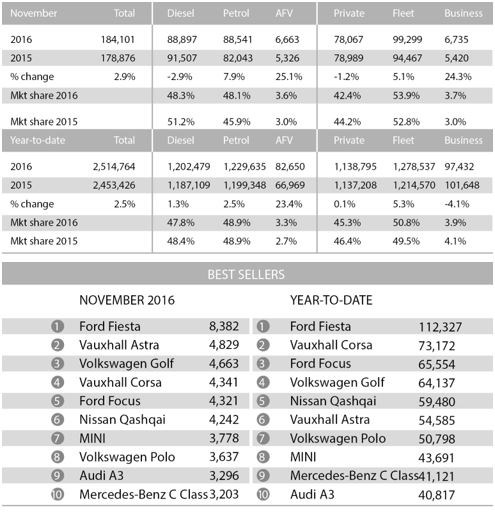