The annual total was 2.3% up on 2015. Data from the Society of Motor Manufacturers and Traders showed there had been increases in the monthly registrations across 10 of the 12 periods in 2016, as carmakers drove new car demand through strong consumer finance offers, tough dealer targets, fleet deals and daily rental.

The fleet sector, which includes manufacturers’ own fleets and daily rental as well as true fleet purchases, was responsible for most of the growth, with demand reaching a record 1.38 million units.

However the private market declined by 0.2% or 2,562 units over the course of the year. The SMMT pointed out that the private market remains at a historically high level, with more than 1.2 million private buyers taking a new car in 2016.

The year closed with a fall in demand in December of 1.1% or 2,055 units overall. The private market alone dropped by 5.5% or 3,964 units, but this was offset by a rise in business registrations. 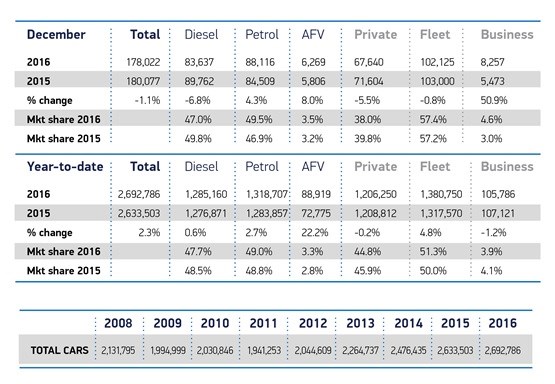 “2017 may well be more challenging as sterling depreciation raises the price of imported goods but, with interest rates still at historic lows and a range of new models arriving in 2017, there are still many reasons for consumers to consider a new car in 2017.

“Looking longer term, the strength of this market will rest on our ability to maintain our current trading relations and, in particular, avoid tariff barriers which could add significantly to the cost of a new car."

Sue Robinson, director of the National Franchised Dealers Association, said: “The retail automotive industry has showed its resilience in 2016 and proved its key role in the UK economy.

"As economic and political changes happen in the near future, we hope that economic measures will be put in place to protect consumer confidence and the interests of our industry.

“Although we are aware of the challenges ahead, we are looking forward to seeing what the new year has in store.”