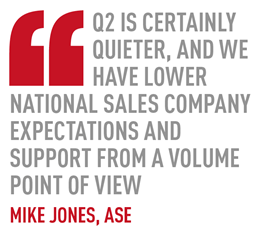 Average franchised dealer profits in the first quarter of 2017 have risen like a rocket alongside the increase in new car registrations. Although Q1 volumes were up 6.2%, or 42,000 units, year-on-year, data from dealer performance firm ASE Global shows average dealership earnings in the quarter rose 20% compared with the same period in 2016.

That rise was fuelled by a new record. March 2017, when the ‘17’-plate was introduced, was the only time a month’s profits have ever exceeded £100,000, as ASE chairman Mike Jones noted: “The genuine retail market was strong, with demand for both new and used cars being healthy”.

As is typical, dealers were on the back foot after a dismal February, when ASE noted the month’s largest loss in five years. However, a £15,100 year-on-year increase in earnings and bonuses in March pulled them back strongly.

Louise Wallis, head of business management at the National Franchised Dealers Association (NFDA), said she believes dealers have certainly benefited from the combination of a later Easter and some pulling forward of new car sales into March. Despite a decline in the new car market during April – which has continued through May, according to a number of AM’s franchised dealer contacts – the NFDA is still expecting a strong dealer performance by the year’s end.

“While there has been some adjustment of forecasts, I’m convinced it will remain a good year, when put in context that we have already had a record year. There has been plenty of feedback from members that they are comfortable with what is happening out there at the moment,” said Wallis.

She said the general election was a “short-term problem”, which may cause some consumers to step back due to uncertainty about which party will govern, and there will be relief once that has taken place. Overall, she said, it is business as usual, and emphasised that UK dealers are extremely adaptable to changes in the market.

‘Our manufacturers cut their Q2 target’

They certainly need to be adaptable. As one franchised dealer source told AM: “Our manufacturers chucked everything they had at Q1, and now have cut their Q2 target.

“Maybe April was bad because everyone was still delivering the March cars they had to get to earn volume bonus. It was as if Q1 was a four-month quarter.”

Another dealer suggested some may write off Q2 and save business for Q3, to avail of bigger bonuses.

Tim Humphries, finance director at Beadles Group, which represents a number of volume and premium brands across Kent, told AM its Q1 earnings were strong, thanks to March’s strong sales, and the group beat its performance in Q1 2016.

He believes the prospects for Q2 are poorer, after the significant decline in April’s market. This decline has continued at least to mid-May, and Humphries warned that for some dealers with high gearing, this poses a cashflow issue.

He said Beadles was in a strong position as it has no loans and it “washed through” its March part-exchanges early in April to release the capital, so the impact on cashflow has been small.

Humphries expects the market to strengthen from June. “It’s likely manufacturers will try to finish Q2 with a flourish, and then there’ll be a lot of activity in Q3,” he added. “We’re bullish about the second half of the year. Overall, we have forecast for growth.”

At Aylesbury Motor Group, sales director Paul Cockton said the family-run Honda and Nissan business had a good first quarter in both sales and profits, although had to do a little pre-registering. So far in Q2 there has been a slowdown, but the business has been “ticking along” generally, he said.

Harratts Group in Yorkshire also had a good Q1 with £279,000 proft, thanks to March profits being £12,000 ahead year-on-year at £564,000. Operations director Craig Fraser told AM it was a “painless” Q1, but in going through a couple of lean months all franchised dealers need to ensure they build up their used car stocks because the drop in new car sales leads to a fall in retail-ready part-exchanges.

Fraser added: “Keeping that sales volume up is important for cashflow. A lot of people concentrate on margins, but you have fixed overheads and you need to keep the money coming in.”

Fraser said some in the industry blamed the slowdown in the new car market on school holidays and fewer working days for servicing due to Easter, but he believes there are broader economic factors at play. The Bank of England has reported that growth in consumer spending is slowing in the face of an uptick in inflation, which reached 2.7% in May, as wages fail to keep pace.

Jones said: “Q2 is certainly quieter, and we have lower national sales company expectations and support from a volume point of view. April profits will have the effect of Easter and an increase of consumer uncertainty around the election. But we see positive signs already for Q3, with some brands increasing their expectations.

“If dealers have strong used car operations and aftersales operations, that counters the concerns when new registrations are lower. There is an argument that this is letting the industry take a breath from processing new cars at record levels, and even with a quieter Q2, the market is still at historically high level.”

He believes dealers will have a good 2017. They are well sheltered from residual values softening because that risk is retained by finance companies, he said. Dealers have benefitted from strong financial results in recent years and a large vehicle parc from which they can make money. In addition, they may be able to improve their margins in each sale, he said.