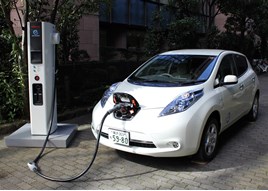 Nissan has accused the trade’s price guides of being pessimistic with their forecasts on electric vehicle residual values.

And there are calls for more retail data to help improve their RV accuracy.

He told Fleet News: “Using pricing data from auctions is misleading because the amount of Leaf volume going through that channel is minimal. The franchised dealer network is retailing these ex-lease vehicles.”

The majority of ex-lease Leafs are on buy-back schemes which sees them returned to Nissan’s franchised dealer network.

And Mark Jowsey, KeeResources director, said that dealers selling used EVs at retail can help protect used values as those dealers are best placed to find the right buyers for the cars.

Jowsey confirmed that the majority of data is compiled from contract hire and auction data, which at the moment is at low numbers.

He said: “It may well be fair that retail data is needed in order to rethink the RV position, but Nissan’s remarketing team needs to share this data on how vehicles are being disposed of within retail networks.”

This compares to a Ford Focus 1.5TDCi 120 ST-Line diesel which depreciates to 38% over the same operating period (the Focus also has a residual value of 31% over the more fleet-typical three years/60,000 miles).

Low residual values can mean higher lease rates for electric vehicles. Lex Autolease and Total Motion, two leasing companies in the UK with some of the highest levels of pure EVs on their risk fleet, set their own residual values to help make contract hire rates accessible.

Simon Hill, Total Motion managing director, said: “I don’t think EV and hybrid RVs are stacking up as well as they should be.

“The result of a poor RV is a much higher lease rate. However, we’re very bold with setting our own RVs. We look at the guides, but I would say we’re probably up to as much as 20% higher than Cap HPI on some models.

“This means we can set our lease rates at a competitive level as a consequence.”

Chris Chandler, Lex Autolease principal consultant, said his company sets its own RVs and they haven’t been as “rock bottom” as the guides suggest.

He said: “If we were way out of step with the guides, we would of course have a look at that.

“I think there does need to be a lot more awareness in the second-hand market and not so many scare stories.”

Cap HPI has seen used values for EVs fall by 9% on average over the past 12 months, double the rate of deflation for other types of car and Andrew Mee, senior forecasting editor at Cap HPI, is confident its EV pricing is accurate.

Rupert Pontin, Glass’s director of valuations, said values for EVs have been lower than values for other propulsion types, although this position is beginning to change amid more favourable press coverage and improved products.

Pontin said manufacturers have always presented the necessary information to be able to understand vehicles for Glass’s to provide “a robust forecast value”.

However, he believed that EVs still posed a risk to fleets due to how quickly technology in the sector is moving. “A car with a 120-mile range coming to the used market at three years old will find itself battling with newer cars with far greater ranges and, therefore, more relevance as an everyday used car,” he said.

“At the moment this causes concern for all contract hire and leasing companies that take these units on risk on behalf of their customers.”