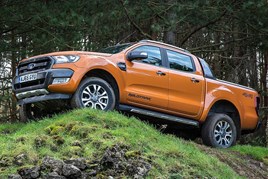 Following indisputable signs in the first five months of this year that the new car market is levelling off, registrations of light commercial vehicles (LCV) appear to be following suit.

Almost all segments have been affected, but dealers representing brands with a pick-up truck in their range, such as the Nissan Navara and Mitsubishi L200, appear poised to capitalise on a product line that bucks the trend.

Registrations of pick-ups, which neared the 50,000 mark in 2016, are already 19%, or 3,556 units, ahead year-on-year in the five months to May 31, to total 22,234. The market could grow further, as the segment is poised to welcome new entrants, such as the Renault Alaskan and the Mercedes-Benz X-Class, although the latter vehicle’s target audience is likely to be lifestyle customers and SMEs.

The success with pick-ups was demonstrated by overall market-leader Ford in 2016, whose Ranger achieved 13,292 registrations and was the 10th most popular vehicle in the whole LCV market. However, five months into 2017, Ranger registrations have declined by 2.4% (4,995 vs 5,116 by the end of May last year).

Examination of additional market data shows fleets are taking on pick-ups in greater numbers. Fleet demand has risen by almost a third (31.8%) so far this year, to 15,973 of the 22,234 total. In contrast, retail orders have declined by 4.5%.

In dealers’ favour, the segment has fresh products to tempt customers. Mitsubishi’s L200 is now only 20 months old, Nissan launched the Navara in January 2016 and deliveries of the new Volkswagen Amarok started in January 2017.

Mike Hawes, SMMT chief executive, said: “LCV registrations have experienced a period of stellar growth in recent years, so this decline was expected as the market stabilises. To put this performance into context, overall demand remains strong, with year-to-date registrations up 51.2% compared with the same period five years ago, and we expect demand to remain stable at similar levels throughout the year.”

The growth in pick-ups may be at the expense of demand for small vans (with gross vehicle weight below two tonnes), which has dropped by a quarter so far this year, continuing the downward trend seen in this segment in 2016, when volumes dropped from 43,018 to 36,918 units. Declines have been heaviest in the Citroën Berlingo (down 25.2%), Vauxhall Combo (down 24.7%) and Vauxhall Corsavan (down 42.5%) ranges.

Andy Picton, chief commercial vehicle editor at Glass’s, said 2016 was a phenomenal year for the industry, with businesses buoyant and confidence apparently unaffected by the EU referendum result.

“It’s also safe to say that if we are to achieve similar successes in 2017 and beyond, it will be essential that the economic conditions that have kept this sector so buoyant in recent years will need to be maintained,” he said.

However, he warned against complacency in the strong segments, pointing out earlier this month that 4x4 pick-up values have come under pressure in the used market due to oversupply.