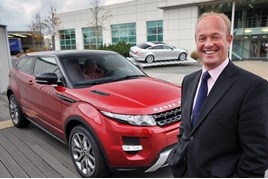 Consumers are being misinformed by headlines demonising diesel cars, the UK boss of Jaguar Land Rover, Jeremy Hicks, has warned.

He believes singling out diesel in the clean air debate, when other factors play a significant role in causing pollution, is a deception. He cited a report that domestic wood burners were responsible for almost 17% of particular emissions in 2013, compared with 18% from all road transport.

“The impression is being given that the way to improve air quality in our cities is simply to ban diesel cars from entering them. Job done. But we know it is not that simple,” Hicks said. He wants the automotive industry, and the country, to still have confidence in diesels.

He suggested that modern Euro VI diesel cars are comparable with petrol ones in terms of emissions of nitrogen oxide, nitrogen dioxide and particulates. “Part of the issue is that all diesels are lumped together,” he added.

The debate needs to focus on the differentiation and the huge moves in technology from Euro I to Euro VI.

Regarding suggestions of a diesel scrappage scheme, Hicks said he believes there’s an issue, in that the consumers who buy the oldest, most polluting diesel cars are not those who can afford to scrap it for a new car, even with financial incentives.