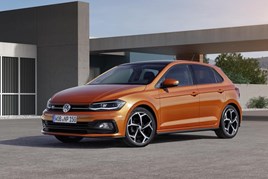 European new car registrations contrasted those in the UK with an overall rise of 7.5% during May.

Jato Dynamics revealed that new registrations for the month had totalled 1.4 million across Europe, making it the highest total for May in the last decade – only 19,000 units behind the record total which occurred in May 2007.

The market analyst said that positive performance had been driven by a relatively stable economic and political situation in the majority of markets, as well as evolution in the automotive sector, with manufacturers bringing more models, new technology and purchasing routes to market.

This came in stark contrast to the UK, where an impending election and the start of Brexit negotiations both contributed to an air of uncertainty which affected consumer confidence, leading to an 8.5% decline in new car registrations in May.

Germany was a significant driver of Europe’s growth. The country posted an increase of 12.9%, Italy also performed well, recording an increase of 7.6% to become Europe’s second largest market.

Other significant markets such as Spain, Poland, the Netherlands and Austria all posted double-digit increases.

Jato recorded a change in customer’s buying habits this month, with the rise of the SUV contributing to falling sales of three-door vehicles.

Despite the overall growth of the market, subcompacts and compacts totalled 76,800 registrations during May, which is a decline of 8.4% on the same period last year. 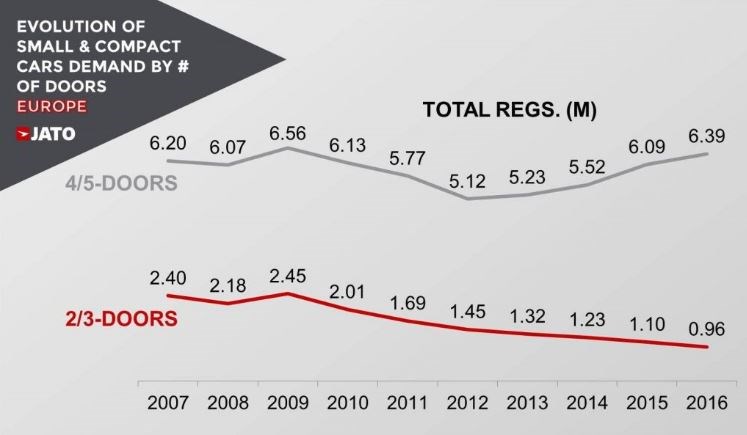 Jato said that the poor performance of 2/3 door hatchbacks is the culmination of a longer-term decline which has seen sales of hatchbacks fall from 2.45 million in 2009 to less than 1 million in 2016 as manufacturers eliminate three-door models.

This was evidenced by the launch of the new Volkswagen Polo, which despite being a subcompact, will not be offered in a three-door version.

The decline of three-door hatchbacks can be attributed to the changing preferences of European consumers who are increasingly rational when choosing small and compact cars.

Felipe Munoz, global automotive analyst at Jato Dynamics, said: “Overall, the market has returned to growth, driven by double-digit increases in many of Europe’s major markets.

“Amidst this, a shift is taking place with hatchbacks in decline. The presentation of the new VW Polo in June with the omission of a three-door model is a symptom of a fundamental decline that could see three-door hatchbacks vanishing from roads.

“There are many reasons for this, but the increasing practicality of cautious consumers is a major factor.

“As manufacturers shun three-door vehicles meaning less choice for customers, the three-door hatch – once a synonym for sportiness – could soon be consigned to history.”

The Volkswagen Group increased its market share following months of decline, as a result of the strong performance of the Skoda and Seat brands, both posted double-digit growth, whilst the Volkswagen brand registered an 8.7% increase, Jato recorded.

SUVs were a major driver of growth, accounting for 28% of the total market as a result of a 22.9% increase in registrations.

The Volkswagen Golf maintained its lead but lost ground, whilst the Polo was the second best performing car.