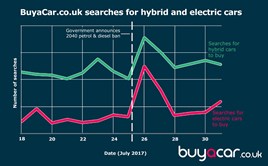 BuyaCar.co.uk has reported a 113% rise in searches for EV and hybrid vehicles on its website since last week's announcement that the sale of "conventional petrol and diesel" vehicles will be banned in 2040.

The online sales platform said that it had eperienced "heightened interest" since then with a rise in the number of customer enquiries about efficient cars, as buyers start adjusting to the idea of petrol and diesel vehicles facing an uncertain future.

BuyaCar.co.uk managing director, Austin Collins, said: “Even though the end of conventional engines isn’t coming for 23 years drivers are already looking at their options.

“There’s no need for anyone to panic, because we’ve all been given plenty of advance warning, but it does make sense to consider the benefits of a more efficient car.

“As well as the fuel savings, business users can make enormous savings on company car tax.

“Even though the interest in hybrids and electrics spiked in the immediate aftermath of the announcement, searches for them have settled back to a higher level than we have ever seen before.

“Even so, we expect that the majority of our customers will be ordering petrol and diesel cars for several years to come.”