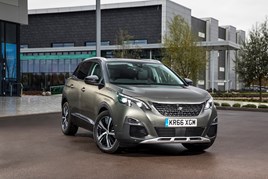 Manufacturers looking to combat the expected slowdown in new car sales during 2017 are already discounting cars by as much as £5,000, according to BuyaCar.co.uk.

The online car sales specialist said that battle has begun among brands keen to defy the SMMT’s suggestion that the market could see a fall in new car sales of up to 6% this year.

And the discounts have even spread to some cars in premium brand ranges including Audi, Mercedes, Jaguar, Volvo and Lexus, which have had more than 15% cut from their price, it said.

More expensive VED road tax – set to become an issue for many from April – and higher list prices caused by a weakening pound have been mentioned as possible cause for a market slowdown, but discounts seem to be counteracting these forces.

BuyaCar even identified the Audi A5 Sportback, Mercedes E200d estate and Peugeot 3008 – each on sale for only around four months – as having discounts of over 15%.

Austin Collins, managing director of BuyaCar.co.uk, said: “Car manufacturers are geared up for a battle over customers and that’s why we’ve been finding discounts on a scale that we haven’t seen before.

“You’re often hard-pushed to get even a few hundred pounds off the very latest models on the market, but we’re offering some brand new Mercedes for £7,000 off the list price.”

The all-new Nissan Micra can already be picked up at a whopping 20% discount despite only going on sale in December, according to BuyaCar. The Renault Megane Sport Tourer, which went on sale at the same time, is already available with 15% off.

The first of the brand new Peugeot 3008 cars, which have a futuristic digital dashboard, only arrived in Britain a fortnight ago but is already available to order at a 20% saving.

Collins said: “Our dealer partners all over Britain are offering their best-ever discounts in an effort to boost sales. We’re expecting these savings to be available throughout February and into March, but it’s not currently clear how long this will continue.

“A lot will depend on how well the manufacturers feel they are heading off the predicted reduction in new car sales.” 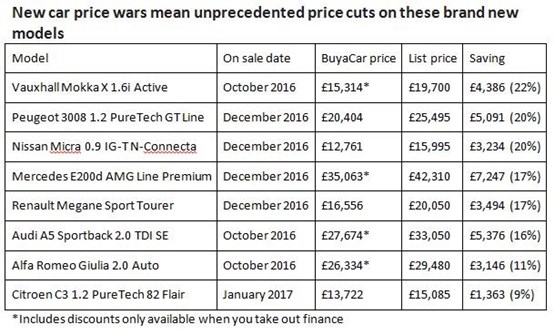