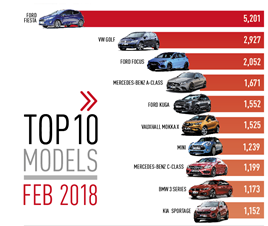 Diesel registrations fell by 23.5% and market share fell to 35% from 44.5% in February 2017. Despite calls by the industry and the SMMT to take a balanced view of diesel pollution (worse than petrol for NOx, but better than petrol for CO2), the industry is itself voting with its feet.

So far, Toyota and Honda have said they will not make diesel versions of future model ranges, and there have been rumours that Fiat will soon announce a similar move. There are already clear signs that diesel is fading away in segments where petrol is a viable alternative, although it remains strong where the size and weight of the car mean diesel is still the only game in town. For example, detailed analysis of the January sales figures shows that supermini diesel sales fell by 42% and lower medium diesel sales fell by 40%, but executive saloon diesel (-2%) and SUV diesel (-8%) fell by a far smaller proportion.

manufacturers that are trading out cars they have taken in part-exchange under their schemes.

Naturally, the biggest beneficiary in the Ford range has been the new Fiesta, which accounts for 42.7% of Ford’s registrations YTD. That is both good and bad news for Ford – big sales of Fiestas are good, but big sales of larger, more profitable cars would be better.

Conversely, sales of what used to be the Fiesta’s deadly rival, the Corsa, have collapsed. In February, it did not even make it into the Top 10, and year-to-date its sales are fractionally over one quarter of the Fiesta’s (26.8% to be precise). The Corsa is even being outsold YTD by the Kia Sportage.

The two main reasons are the 2014 “new Corsa”, which was an attempt to prolong the ancient Fiat Punto-linked platform for another four years, and the apparent decision by PSA to let Vauxhall sales find their natural level. Like all its rivals, Vauxhall still offers sizeable incentives, but it is no longer forcing the market by offering discounts that are out of line with the competition.

PSA must be hoping that, as with coming off a drug habit, the short-term pain is intense, but the medium-term benefits will make the agony worthwhile.

Vauxhall has slipped down the sales charts (fifth YTD, and sixth in February), with Volkswagen taking Vauxhall’s traditional second-place spot. The highlight of VW’s performance is that the Golf has overtaken the Ford Focus (by 1,000 units YTD) for second place in the model table.

However, the interesting thing is that the Golf is the only VW in the Top 10, which shows the breadth of the range. VW still manages to hold the second spot despite having only one blockbuster product – the Polo, Tiguan and Passat are all making unspectacular, but sizeable, contributions to the sales total.

Meanwhile, the three German premium brands continue their relentless progress. Audi and Mercedes-Benz are neck-and-neck for third spot, with just 50 units separating them YTD, while BMW had a stellar February (8.35% market share).

Behind them come a cluster of Asian brands: Toyota, Kia and Nissan are all within a few hundred units of each other, with Hyundai a little way behind. The significant figure here is that Nissan is trailing Toyota, having suffered a 37.6% fall YTD. At just 2.87% for February, the market share is the lowest since the days of the Nissan Almera. Nor is it a question of models on run-out – the much-trumpeted investment in the next Qashqai and Juke at Sunderland is still some way off.

Component suppliers report that many contracts for the new models still have not been signed, so production is still more than a year away.

Just outside the Top 10, Peugeot (11th position in February) is only fractionally ahead of Škoda. Readers of a certain age, who grew up with Peugeot being a Top Four brand while Škoda was a niche player, will find that slightly disorientating.

Indeed, the new Škoda Karoq could further increase Škoda sales, although filling the paw prints of the extinct Yeti is a big ask.

Meanwhile, Peugeot launched the new 508 at the Geneva Show – although big saloons are barely relevant anymore outside China, it should be acknowledged that most observers felt Peugeot has come up with its best-looking four-door since the 406 of the 1990s, if not the 405 of the 1980s.

Seat, Škoda’s Spanish cousin, should also get an honourable mention. Seat was arguably the brand most hurt by the rise of Škoda – if Škoda produces a value VW, what is Seat actually for?

However, the recent Ateca and new Arona provide the first convincing answer – very competitive small and medium crossovers. So far this year, Seat is outselling Honda, Citroën and Renault, which is an excellent start by any standard.

Talking of Renault, it is still in a difficult position. Half its sales come from the Captur and Kadjar, which are decent products, but both are perceived as Renault’s versions of the Juke and Qashqai, both of which have far stronger images in the UK. The once-mighty Clio now accounts for approximately 25% of sales – but is still less than one fifth of the Fiesta’s volumes.

However, the biggest issues are faced by Fiat’s specialist brands – Alfa Romeo and Jeep. Despite billions spent on the Giulia and Stelvio, Alfa Romeo’s market share is static at about 0.2%, while Jeep’s share has actually fallen to 0.17%. The oddest paradox in the UK market is that the only brand not to benefit from the SUV boom is the company that invented the 4x4. DAVID FRANCIS