Car buyers are being advised to choose pre-registered diesel cars to avoid an increase in the tax that has seen the price of some of the most popular models in the market go up by more than £300.

The diesel surcharge, that came into force on April 1, adds between £15 and £520 to the cost of taxing a car in its first year. Dealers pay the fee on behalf of buyers, which is why prices have gone up to reflect the extra cost.

However motorists can dodge the diesel tax, which only applies to brand new cars from the beginning of this month.

BuyaCar.co.uk managing director Austin Collins said: "Pre-registered diesel cars, which typically have only a handful of miles on the clock, are not subject to the new tax - and are usually available with additional discounts - as long as they were registered and given a number plate before the end of March.

"The savings on pre-registered family cars can run into thousands of pounds, including the tax savings."

For example, the new price of a petrol Ford Kuga Titanium 1.5 T EcoBoost rose by just £30 from April 1st, but the diesel equivalent model went up by £315.

In the case of a Ssangyong Korando the petrol model price remained unchanged while the diesel equivalent version rose by £350.

The change was even more stark for buyers of the diesel Mercedes E-Class with an E350d AMG Line now costing £440 more, while the price of the petrol E350e AMG Line remained unchanged.

Last month BuyaCar.co.uk revealed that many consumers are already bypassing new cars in favour of savings already available on cars with the new March plate. "Those cars are being pre-registered by dealers to sell as used cars, so they can hit new registration targets."

The online motor retail specialist now says that the new tax hikes on diesels is likely to boost interest in pre-registered diesel cars even more.

“With new diesel sales still on the way down, but used diesels still popular, we foresee customers searching out the greater savings available with pre-registered and nearly new cars," Collins said.

“Cars sporting the brand new March 18-reg plate were already on sale by the middle of last month, so it's clear that there are plenty of deals available, offering substantial savings."

The diesel surcharge was announced in last year's Budget and affects the tax paid on new vehicles, which is based on carbon dioxide (CO2) emissions.

All diesel cars move up a tax band, which increases the cost of tax by between £15 and £520. The surcharge only applies for the first year, after which owners of petrol and diesel cars pay a standard annual rate. 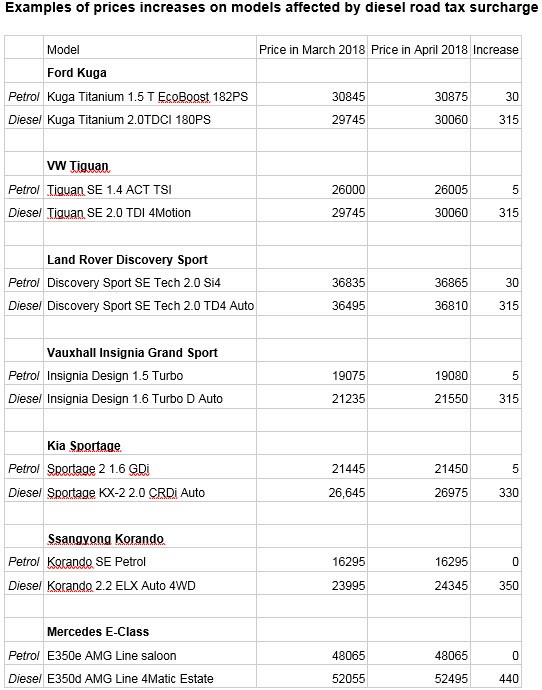