The new and used car markets can be a bit of a challenge during the month of April with plenty of distraction for the retail consumer often leading to a patchy month in terms of both demand and sales.

Thankfully this year has been very different and it would seem from both market comment and factual retail-based data that there has been a much more confident period of trading.

The new car market posted registrations up 10.4% on the same period last year and this should not be a surprise given the market last year had been distorted by the Government VED changes that came into effect in March 2017.

At 8.8% down to date this year, new car registrations look set to balance over the remaining months of the year and it seems as though a final figure of around 6.5% behind 2017 is where the figures will finish as predicted by Cazana earlier in the year.

It would have been good if the national press had reported this as enthusiastically as they covered the large drop in registrations last month.

From a used car market perspective retail activity has been consistently strong with plenty of incentives to buy a used car in place from both dealers and finance companies alike. These have hit the mark with the retail consumer.

However, stock has been difficult to find and as such many businesses have anecdotally reported that the “profit corridor” has been squeezed.

The chart below provides high level data on profit corridor performance by fuel type for all vehicles up to 10 years old by key fuel type.

This is based on Cazana retail back methodology and is shown as a gross percentage. 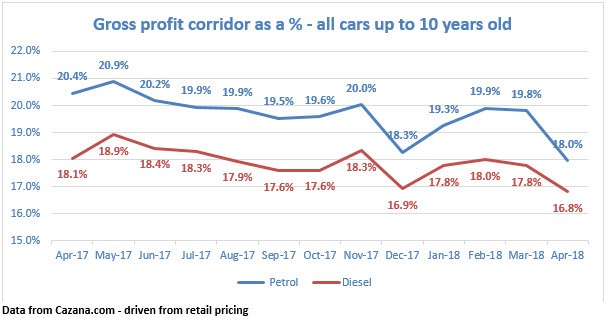 The chart shows that the profit corridor has been on a downward trend since April 2017 for both fuel types.

During 2017 this is likely to have been caused by the pressure of improving the presentation of used cars for sale and the associated increase in costs.

Whilst matters improved in the early part of the year as retail consumers were in abundance, the profit corridor since February has seen a decline as it has been more difficult to get hold of stock.

However, this is a much smaller reduction than many may have expected.

The impact of lower wholesale stock levels has also been evident from a retail pricing perspective and this has manifested itself across most market sectors and more interestingly fuel type.

The chart below looks at the ex-PCP market profile that has been the subject of so much discussion in the industry as whole.

The data here is based on Cazana Retail pricing as a percentage of original cost new. 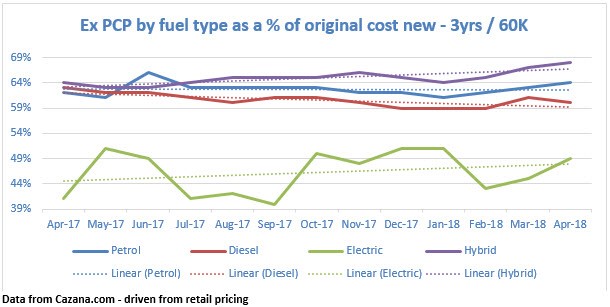 This chart is important as it shows a number of key Retail pricing insights.

Firstly, it shows that diesel propulsion is the only fuel type to be on a downward trajectory over the last 12 months.

This is not surprising given the volumes of vehicles returning to the market but the year on year drop is just 3% which is by no means as severe or damaging as either the press or the trade anecdotal comment might portray.

Secondly, the chart demonstrates that retail pricing as a percentage of cost new across all fuel types has risen in 2018 as a direct result of the upturn in retail demand.

It also reflects the fact that electric vehicles are beginning to come into their own now that range is less of an issue and both the consumer and dealers understand how appropriate these vehicles can be for certain customers.

An increase of 8% of original cost new over the course of a year is substantial and likely to continue as residual values bring themselves in line with other fuel types.

However, the market remains volatile as the chart clearly shows and the volume of data is significantly lower than the market appreciates although this will improve quite rapidly as more cars come to the market.

To conclude, April 2018 in isolation has been another encouraging month in what is widely expected to be the year of the used car.

With new car sales in decline and more used cars coming to the market profit opportunities are still available, but the key is to work with the latest real-time data to facilitate the best understanding of the market and to maximise on the profit corridor opportunities that are on offer.

Detail is key and being able to work with Big Data will make the difference in what is a really invigorating market.

AM Poll
Are video appointments a better use of sales executives' time than face to face appointments? Please leave a comment.
Vote
View all
2391