‘Diesels down as SUVs soar’ fails to tell the whole story 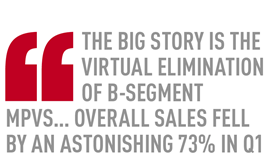 If pressed, most people would probably identify two current trends in car sales – a precipitous decline in diesel sales, and the inexorable rise of SUVs and crossovers.

Taking the issue of diesel first, the figures for the first quarter (overall market down 12.4%, diesel market down 33.3%) seem to speak for themselves. One would expect that any manufacturer which is diesel-heavy is going to be in trouble – hence Land Rover sales have fallen by 19.9%.

However, the truth is not quite so simple. To take Land Rover as an example, if all diesels are equally unpopular, one would have expected sales of everything from an Evoque to a Range Rover to have fallen by a similar amount. Yet the Evoque fell by 42.1% in Q1, but the Range Rover/Range Rover Sport fell by 11.2%.

So, what is going on? The critical factor seems to be the availability of a viable petrol alternative. For most people buying an £80,000 SUV, petrol is not really a choice (except as part of a hybrid), so they keep buying diesel Range Rovers – at least for now. However, for buyers of the smaller, lighter Evoque, petrol is – or at least should be – a viable choice. In the case of the Evoque, the only petrol engine is the powerful, thirsty 240PS unit. Hence buyers are more likely to defect to a competitor that does have a viable petrol engine. In contrast, sales of the Ford Kuga SUV actually rose by 3.3%, although sales of diesel Kugas fell by 7.9%. The key factor for the Kuga seems to be the availability of the 1.5-litre Ecoboost petrol.

What counts as a crossover?

The second trend – the perceived shift towards crossovers – is harder to argue with, apart from the fact that defining a crossover is not easy. A Discovery is clearly an SUV and a Qashqai is clearly a crossover, but there are plenty of models close to the dividing line. The general principle in the industry is that if it started life as a 4x4 it is probably an SUV (e.g. Toyota RAV4), and if it started life as a tall, two-wheel-drive hatchback (e.g. the Nissan Juke) it is probably a crossover.

In total, SUVs and crossovers took 36.5% of the total market in Q1 2018. By our definition, that was made up of 22.1% SUVs and 14.4% crossovers, but the precise proportions will vary according to each person’s way of looking at the issue. It is easier to say where crossover sales are coming from – traditional hatchbacks are under pressure and small MPVs are being decimated.

In non-premium B-segment hatchbacks (e.g. the Ford Fiesta), the decline was not too serious, at 13.7% for Q1. However, the big story is the virtual elimination of B-segment MPVs, such as the now defunct Ford B-Max. Overall sales fell by an astonishing 73% in the first quarter, with a total of just 3,500 registrations. A couple of B-segment MPV models may survive in the UK if sales in other markets justify production, but the sub-segment looks like it is heading for extinction. 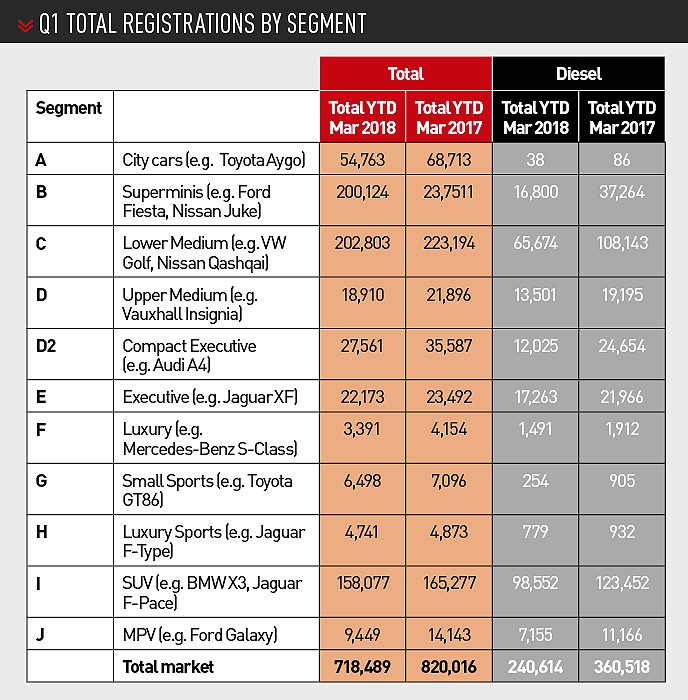 Sales of non-premium C-segment hatches (e.g. the Ford Focus) fell 18.6% in Q1, with the Vauxhall Astra down a remarkable 47.1%. C-segment MPVs (e.g. the VW Touran) fell by 37.1%, and it seems unlikely that a single C-segment MPV will end the year with sales of even 10,000 units. It is hard to see how many of the current models can be replaced given those volumes, and the segment may revert to where it started – small “vans with windows”, such as the Citroën Berlingo and Ford Tourneo.

In the D segment, the big news is what is happening to the Ford Mondeo. Once the dominant car in its segment, the Mondeo has fallen to fourth place behind the Škoda Superb, selling just 2,500 units in Q1. When the Superb was launched in 2001, you would have got longer odds on it overtaking the Mondeo than on Leicester winning the Premiership. Indeed, with Ford announcing that the Mondeo’s American twin, the Fusion, will not be replaced, and suppliers saying they have been told that European Mondeo production will end around 2020, the current Mondeo may be the last. That truly would be the end of an era – Ford invented the D segment with the Cortina in 1962. It has made the UK’s best-selling large family car for decades – indeed for many years the Cortina was the UK’s best-selling car overall. The very concept of a D-segment car is now at risk – only VW can justify the cost on current European sales volumes. Other manufacturers probably need to sell a closely related car in China to make the numbers add up.

So to the segment that is busily eating every else’s lunch: SUVs. The interesting thing is that, broadly speaking, the bigger the SUV, the better in terms of sales. Small SUVs such as the RAV4 were down by 13.8% in Q1, large SUVs like the Hyundai Santa Fe or Ford Edge were marginally up by 0.7%, and luxury SUVs like the BMW X6 were up by 5.2%.

It seems buyers of expensive SUVs regard diesel’s reputation as a problem for other people. Perhaps when you drive a 2.2-tonne SUV, you are so used to social disapproval that a few stories about air quality are like water off a duck’s back. It will be fascinating to see whether the new Jaguar I-Pace electric SUV (or crossover if you prefer) transforms the attitudes of such people. After all, they may not care about public opinion, but they generally care about fashion.
DAVID FRANCIS