The threat of a ‘no deal’ Brexit halved the influx of fresh investment into the UK’s car manufacturing sector, according to the Society of Motor Manufacturers and Traders (SMMT).

The SMMT blamed the threat of Brexit for a trend towards declining investment in the sector, which saw fresh investment halve during the past 12 months.

It said in a statement issued this morning that “new calculations show two thirds of UK’s global car trade at risk from ‘no deal’”.

Mike Hawes, SMMT chief executive, said: “With fewer than 60 days before we leave the EU and the risk of crashing out without a deal looking increasingly real, UK Automotive is on red alert.

“Brexit uncertainty has already done enormous damage to output, investment and jobs. Yet this is nothing compared with the permanent devastation caused by severing our frictionless trade links overnight, not just with the EU but with the many other global markets with which we currently trade freely.

“Given the global headwinds, the challenges to the sector are immense. Brexit is the clear and present danger and, with thousands of jobs on the line, we urge all parties to do whatever it takes to save us from ‘no deal’.”

The SMMT said in its statement that regulatory changes and ongoing uncertainty over future diesel policy and taxation had been exacerbated by declining consumer and business confidence during 2018. 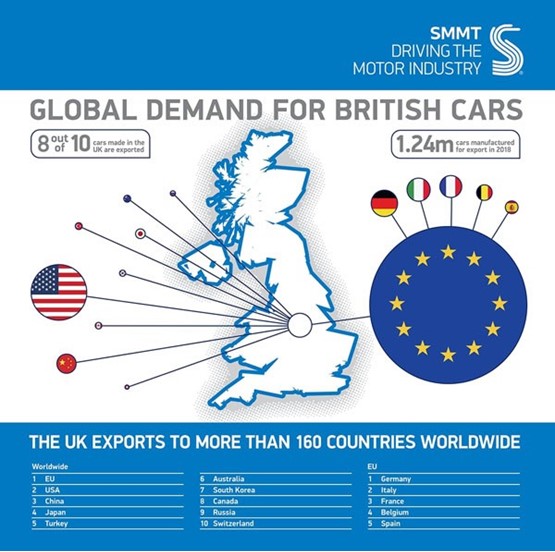 Registrations of British-built cars in the UK down -20.9% in the year

Exports were also down as slowdowns in important European and Asian markets took effect.

UK car exports to China slumped 24.5%, while EU demand fell by 9.6%, although less steeply than the decline at home.

Some positive news came as a result of the increased availability of several new premium models currently built only in the UK.

The SMMT said that exports to the US had grown by 5.3%, cementing the country’s position as the UK’s second biggest customer after EU and underlining the risk to output if tariffs are imposed.

It said: “Both countries, along with other key markets, including Canada and Turkey, are (or will imminently become) subject to preferential EU trade agreements, from which the UK benefits – together representing 15.7% of UK car exports.

“Time has almost run out to guarantee continuity of any of these arrangements before Brexit, and ‘no deal’ could therefore put more than two thirds of UK Automotive’s global trade under threat.”