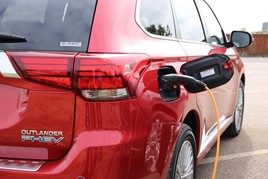 The UK’s 34.9 million car parc emits 17.8% less CO2 than a decade ago, despite claims that the ‘demonisation of diesel’ would trigger a rise in environment-harming emissions.

The Society of Motor Manufacturer and Traders (SMMT) reported in its newly-published Motorparc data set showed how average CO2 emission had fallen to their lowest ever level, despite the record number of cars on the road, as “more drivers benefit from advanced low emission vehicle technology”.

Among the statistics revealed by the SMMT was the finding that the UK’s plug-in car fleet ownership rose by 76.6% in 2018, with 195,410 vehicles now on British roads.

SMMT chief executive, Mike Hawes, said: “Thanks to massive investment from manufacturers in delivering a wide range of models across all fuel types, to suit all driving needs, environmental gains are now being delivered across the UK.

“Ever-more advanced in technology makes every new generation of vehicle more efficient than the last, and this is filtering rapidly from the new car market into the broader parc.

“Fleet renewal is proven to work so we need a world-class package of incentives and infrastructure to give motorists the confidence to buy the latest, cleanest cars, whatever the fuel type, in the greater numbers we need to meet environmental challenges.”

A year ago the SMMT led calls for a change in government policy to help lower CO2 emissions after the total UK fleet recorded an increase of 0.8% during 2017.

The SMMT warned in a statement that “the anti-diesel agenda and slow take-up of electric vehicles” could mean industry misses its next round of CO2 targets in 2021, with negative consequences for the UK’s own climate change goals.

The call for action came after the publication of the SMMT New Car CO2 Report 2018: Driving the transition to a low carbon future revealed that carbon tailpipe emissions rose for the first time in two decades last year, by 0.8% to 121g/km.

This despite cars being ever more efficient, with new and updated models in 2017 emitting, on average, 12.6% less CO2 than those they replaced.

However, commenting at the time, the SMMT said that this was not enough to offset the decline in new diesel registrations as confusion over government policy caused buyers to hold back.

The increase in the fleet average new car CO2 figure in 2017 followed 19 years of reductions thanks to massive investment in new, advanced engine, fuel and battery technology, it said.

The latest data issued by the SMMT suggests that the tide may now be turning turning towards alternative fuel vehicles (AFVs).

The UK’s record 34.9 million-strong car fleet has never been more diverse, the SMMT said, with more than 1,600 model ranges and almost 68,000 different specifications on the roads last year.

While superminis continued to dominate, making up a third (33.2%) of all cars in the parc, dual purpose vehicles saw the biggest growth, meanwhile, up by 10.6%.

At the same time, family hatches and saloons (upper medium) saw the largest fall, down 4.7% to four million.

Elsewhere, the data reveals that female car ownership remains at a record high, surpassing 2017’s level by 1.4%, with more than 12 million cars now owned by women.

The SMMT said that its Motorparc database enables the analysis of records for almost 40 million cars and commercial vehicles currently on the road, broken down by make, model, region, town and postcode.

With more than 23 years of historical data, it is one of the richest automotive data sources anywhere in the world. More information about SMMT’s Motorparc and new vehicle registrations data services can be found at www.smmt.co.uk/data.