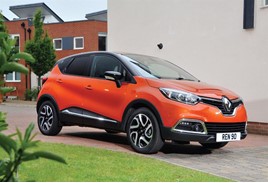 A state-funded research body has claimed high sales of SUVs are making “a mockery” of UK policy and risking the UK transport sector’s ambition to meet European Union emissions targets.

The UK Energy Research Council says emissions from new cars have been increasing rather than declining as a result of SUVs outselling electric cars by 37 to one in the UK.

Professor Jillian Anable, co-director of the UKERC, said government must immediately “start to phase out the most polluting vehicles”.

“It is time to enact a strong set of regulations to transform the entire car market towards ultra-low carbon, rather than focusing solely on the uptake of electric vehicles,” she said.

It said the VED scheme’s imposition of expensive first registration fee VED on higher emissions cars is “useless” because PCP finance allows buyers to wrap the tax into their monthly payments.

The UKERC, which is backed by the government funding agency UK Research And Innovation, pointed out that SUV sales accounted for 21.2% of the UK’s new car market in 2018, up from 13.5% in 2015.

“Assuming the majority of these SUVs will be on UK roads for at least a decade, it is estimated the extra cumulative emissions to total around 8.2 million tons of CO2.”

However manufacturer data shows that the majority of SUVs sold are ‘crossover’ SUVs with the same kind of two-wheel drive powertrains as common hatchbacks, rather than all-wheel drive systems that increase vehicle weight, fuel consumption and emissions.

In its paper, the UKERC pointed out that battery electric vehicles are less than 1% of the UK car market currently.

It is less than a decade since the UK launches of the first generation electric cars - Mitsubishi iMiev in 2010, Nissan Leaf in 2011 and Renault Zoe in 2013 – and their attraction to mainstream motorists was lacking given the price premium required, limited charging facilities and useable range of less than 80 miles between charges.

But the UK new car market must compete for their supply with other European countries also keen to reduce their emissions in line with the EU targets, and some of those other countries are offering their consumers more incentives to change into EVs.

The UK Treasury has reduced the plug-in car grants that were initially available to encourage uptake.

There are around 30 more electric or plug-in hybrid models expected to join the market in 2020, and the SMMT has predicted plug-in cars will account for 15% of the total market.

The Department for Business, Energy and Industrial Strategy has predicted in 2030 one third of the 36 million cars in the UK will be plug-ins.

The UKERC last year said the 2040 target for phasing out conventionally fuelled vehicles (ICE-electric hybrids will remain) is “inadequate and does not fit with our emissions targets”, and called for the deadline to be brought forward.

“The rapid uptake of unnecessarily large and energy-consuming vehicles just in the past few years makes a mockery of UK policy efforts towards the ‘Road to Zero,” said professor Anable.