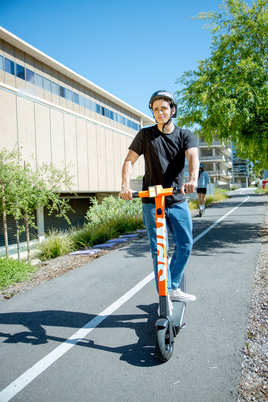 Ford's micromobility unit, Spin, has marked the one year anniversary of its Essex e-scooter trial's launch with the news that usage has reached 600,000 rides.

The Spin e-scooter pilot in the county, where Ford UK has its headquarters, has recently been extended until November 2022, as part of Department for Transport trials hoped to reduce urban car use and promote zero emission mobility.

Data from the trial shows the e-scooters have mostly been used for journeys of an average of 1.8 miles and a 23 minute travel time.

In Brentwood and Braintree consumers can hire a Spin e-scooter on a monthly basis. In Chelmsford, Colhester, Basildon and Clacton users can hire on demand.

Spin announced this month it will focus on developing in the UK, USA and Canada and will end its operations in Germany, Portugal and Spain to speed up its path to profitability.

As part of Spin’s commitment to safe riding, it has organised 26 free in-person safe riding training events in Essex, in which more than 800 members of the public have participated.

Spin has also handed out 1,500 complimentary helmets to its Essex riders since its launch.