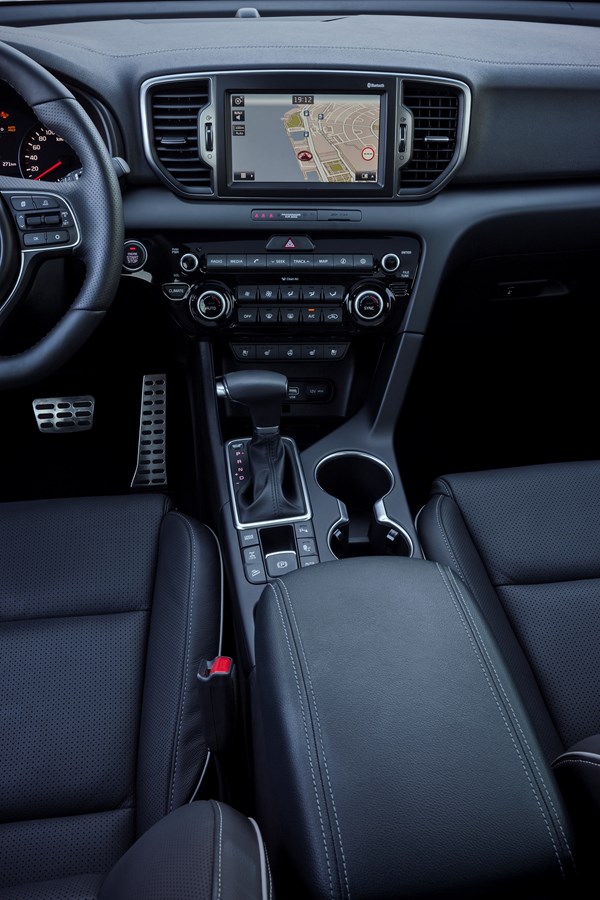 Kia Motors has revealed more details of the all-new Kia Sportage that makes its global debut at the Frankfurt Motor Show on September 15.

“It’s an incredibly important car for us, particularly as more customers are turning to SUVs and competition in the rapidly growing compact segment is now fiercer than ever.”

“In Europe, the Sportage is Kia’s flagship car, clearly demonstrating our brand values best and consistently accounting for more than a quarter of our European sales.

“As this hotly-contested segment continues to expand, the new Sportage will reinforce our position among the market leaders, leading the way in terms of its refined innovation, distinctive design and high material quality.”

The Kia Sportage is the brand’s bestselling model in Europe, with more than 97,000 sold across Europe in 2014, accounting for 27.5% of Kia sales.

The ‘face’ of the Sportage features the biggest change to the car’s design over the outgoing model, with Kia’s hallmark ‘tiger-nose’ grille and the car’s headlamps separated for the new model.

The headlamps are now positioned higher, sweeping back along the outer edges of the sharply-detailed bonnet.

A lower, wider grille – enlarged to support greater engine cooling – adds more volume to the lower half of the Sportage’s.

The all-new Sportage is available with a choice of 16-, 17- or 19-inch aluminium alloy wheel designs, while the GT Line specification comes with a 19-inch wheel option as standard.

The Sportage has an all-new interior, representing, what Kia calls, one of the most significant improvements over the third-generation car.

The focus for the design team behind the new interior was to create a cabin which offered a “wide, driver-oriented dashboard, with a simple, modern design”.

The Sportage’s cabin boasts a higher standard of material quality, with a far greater proportion of soft-touch materials and the use of cloth, leather and stitching.

For all models, visibility is improved out of the front and rear. Forward visibility is aided by a lowered A-pillar base, while the A-pillar itself has been made thinner.

The new body’s larger dimensions mean cargo space in the fourth-generation Sportage has expanded from 465 litres to 503 litres, made more practical by a dual-height luggage floor, allowing taller items to fit into the boot and still remain hidden by the tonneau cover.

The all-new Sportage has greater fuel capacity than the third-generation model, with the fuel tank increasing from 58 litres to 62 litres.

Available safety systems will include:

A new addition is the navigation system with Kia’s ‘connected services’, offering a wide range of up-to-date driving-oriented information.

In Europe, the system will be available to Sportage buyers free of charge for seven years after the car’s purchase.

The infotainment system is paired with a 160 watt six-speaker audio system, while buyers can specify 320 watt JBL sound system, featuring eight speakers, and an external amplifier.

A first for any car in its segment, the new Sportage will be available with a new wireless charger for mobile devices.

Located at the base of the central instrument stack, the wireless charger enables users to charge their phone or tablet without a wire connection.

The charging system activates when a compatible device is placed on the pad, and warns owners when they’ve left a phone on the charger when they leave the vehicle.

Depending on market, other new available features will include: a rear-view parking camera with dynamic parking lines, a ‘smart power’ tailgate, which opens the tailgate automatically when the key is ‘sensed’ in close proximity to the tailgate; ‘dynamic bending’ headlamps, which sweep the road ahead in line with the steering wheel for greater visibility and improved safety at night; and a new ‘smart welcome’ function, which turns on interior and door handle lamps and unfolds the door mirrors once the smart key fob is located within 1.3-1.7 metres of the door handle.

Every engine in the range is compliant with the latest Euro 6 emission standard, resulting in cleaner exhaust emissions.

The fourth-generation model carries over many of the engines found in the current vehicle.

A new 1.6-litre T-GDI (turbo petrol direct injection) is also available for the first time on the Sportage, exclusively for GT Line buyers.

The range of petrol engines is made up of a 1.6-litre GDI (petrol direct injection) engine and the brand’s latest 1.6-litre T-GDI power unit.

Diesel engines account for the majority of Sportage models sold in Europe, and the new model will continue to offer the 115PS 1.7-litre CRDi engine – carried over from the third-generation model – and an upgraded 2.0-litre ‘R’ power unit.

The all-new Kia Sportage will go on sale across Europe in Q1 2016, offering the company’s seven year, 100,000 mile warranty as standard.