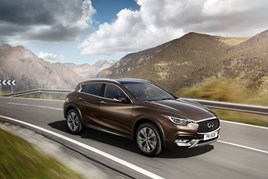 Infiniti has revealed its new QX30 crossover ahead of the new model going on sale in the middle of next year.

The new crossover model joins the Q30 as part of Infiniti’s new premium compact model line-up and will go up against models like the Audi Q3 and BMW X1.

Prices and specifications are yet to be confirmed, but the QX30 is expected to come with four-wheel drive as standard, a 168bhp 2.2-litre diesel or 208bhp 2.0-litre petrol. Prices are expected to start from around £27,000.

The QX30 will be built alongside the new Q30 at Nissan’s Sunderland factory.

Infiniti’s UK network is currently at 10 locations (of which half are manufacturer-owned) but the brand is looking to expand in the UK with the hope that an expanded model range will attract new franchise partners. Recent appointments include FG Barnes at Maidstone and Vertu Motors in Newcastle.

In addition to sales points, Infiniti UK needs to increase its service coverage and is beginning a pilot programme of authorised repairers, which will be in place for the January launch of Q30. Recruits will not necessarily need premium brand experience, but will need to represent the Infiniti brand properly. Some of these may later decide to upgrade to a full sales and service franchise.